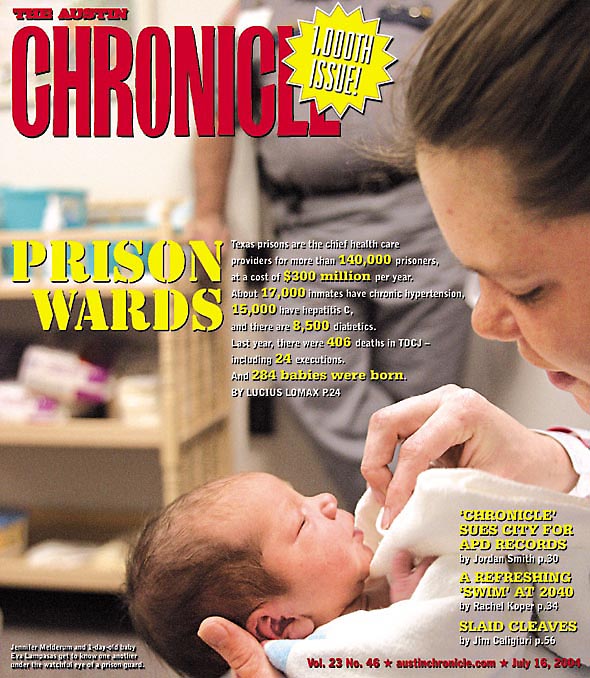 ON THE COVER:
The Least That Money Can Buy
news

The Least That Money Can Buy

In the mirror world of TDCJ, life goes on

You Can't Have That!

The Emmis Shoe Falls at KLBJ

At a late and noisy meeting, CAMPO moves to toll Central Texas

A 'Truth-Teller' Passes On

Friends and family honor the memory of Lucy Selby

A Deal for the Ozo 3

Marijuana law updates from around the country

E-Voting in the Hot Box

Activists meet at the Capitol to address cybervoting threats to democracy

If It's July, It Must Be Re-Org

Picking Up the CHIPs

Clarendon scandal opens a window on the joys of privatization

Light rail – it's not just for lefties anymore; and parks officials are forced to be Bush spokesmen 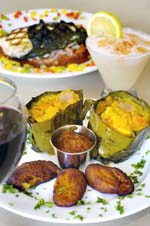 Doña Emilia's outgrew itself on East Seventh. It's outdoing itself on Cesar Chavez.

V.B.W.'s birthday treat for her sister Suzy is a summertime treat for all!

Trying to Never Catch Up

Language of the Heart

A Strange Mess of Flowers

Teen Beat on the Eastside

In filmmaking, it's best not to settle for the obvious target. Paul Stekler's 'Last Man Standing' shows why.

The Austin Film Society asks for your assistance, and SXSW does the summer thing; plus, Mike Judge's garage sale

Affectionate biography of Cole Porter's life is packed wall-to-wall with song-and-dance numbers but is short on new insights.

This summer, Will Smith saves the world from … robots.

The Story of the Weeping Camel

A story about a Mongolian camel and her newborn calf becomes a transfixing lesson about the rhythms of life.

In "Summer Swim," 2040 Gallery owner Mo Scollan has put together a cooling and exquisite show

Hail to the Chiefs

By popular demand, the boys of 'The Dead Presidents' Club' are back in town

A Plum Job for Bloom

Debbie Does Dallas – The Musical

Much of the Seventies send-up Debbie Does Dallas – The Musical is so bad it's good, but overall, Naughty Austin's production is wildly inconsistent

Despite its seemingly morose story, Zilker Theater Productions' The Secret Garden is most assuredly uplifting, even moving

The Lion, the Witch, and the Wardrobe

In Second Youth Family Theatre's The Lion, the Witch, and the Wardrobe, two energetic actors perform a brisk version of the book with ingenuity and unexpected flair
columns

Welcome to our 1,000th issue, perhaps

Well, your Style Avatar is no stranger to sibling hijinks, so it's about time he got it together with the Olsen twins. (We don't even know what that means …)

How can I reduce the amount of chlorine absorbed during showering?