Media Watch: All Things to All People Meters 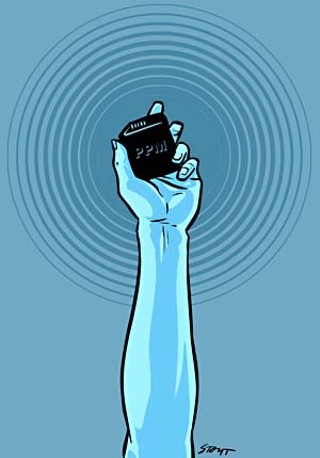 Local radio executives are hard at work examining the first round of data from a new ratings system, the biggest shake-up in the radio business since Marconi invented the car dealership commercial.

Austin's radio pooh-bahs have been reconfiguring their stations for months in preparation for the new system, which will dictate the future of on-air programming. Changes have ranged from dropping Spanish-language formats that didn't perform well in other PPM markets to more subtle tweaks, such as rearrang­ing commercials, eliminating traffic reports, and instructing disc jockeys to announce upcoming songs instead of recently played songs, in order to entice listeners to stick around.

"We've all been very nervous with the changes at a time when the economy is so tough," said Scott Gillmore, market manager for Emmis Communications, which owns six stations in Austin.

Although final numbers for the quarter are still not available, preliminary results for July and August don't show the massive shifts expected (or feared) by many in the industry. Following the trend in other markets with PPM, stations playing generic pop hits performed best. In August, the top-ranked station among listeners ages 25-54, the most desirable demographic, was perky pop machine Majic 95.5FM, which tended to finish around fifth in the diary system. Majic was followed by hit jukeboxes Bob-FM and Kiss-FM, country KASE, and Mix 94.7FM. Even oldies station KXXS-FM, "True Oldies 92.5," which didn't register a blip in the diary system, showed up as the 17th-ranked station, beating out sports stations KVET-AM, "The Zone," and KTXX-FM, "The Horn."

In general, PPM tends to punish talk-heavy stations, with meters diligently recording every time a listener channel surfs to find a familiar song. To compensate, many Austin shows have been reining in disc jockeys and adding more music to morning shows. "We're trying to minimize the useless chatter," said Alan Kirshbom, market manager for Enter­com Communications, which owns three stations in Austin, including Majic and Mix.

With that in mind, KLBJ-FM's all-chatter Dudley and Bob Morning Show pulled something of an upset by ranking No. 1 in the 25 to 54 age group, testimony to the loyalty of the show's listeners. In a similar fashion, news-talker KLBJ-AM beat the odds by posting strong numbers. In other markets, Rush Lim­baugh and his cohorts have seen a sharp drop-off, but KLBJ is managing to remain in the top tier of local stations. "KLBJ-AM targets a younger audience than many news-talk stations, and that helps," said Chase Rupe, director of programming and operations for Emmis, which runs KLBJ-AM and -FM.

The new PPM numbers also include public radio station KUT, which was never part of the ratings mix under the diary system. Although many public stations around the country haven't fared well in PPM – there was an assumption that public radio's audience was inflated under the old system by diary users who liked to sound sophisticated by listing their local public radio station – KUT posted strong numbers in July and August, especially the nationally syndicated Morning Edition and All Things Considered programs.

Some of the other interesting tidbits gleaned from the ratings:

• Although the morning rush hour has traditionally been considered the largest draw of the day, PPM shows Austin's largest listening audience tuning in at midday, followed by the afternoon drive, 3-7pm, with mornings third.

• For the first time, stations streamed on the Internet showed up in the ratings, hinting that the shift toward Web-listening is a very real phenomenon, even for established terrestrial stations. "It speaks to what we know, which is that Austin is a very tech-savvy city," Kirshbom said.

• PPM is supposed to eliminate the wild fluctuations often found in the diary system, but there were still some inexplicable shifts from July to August. For example, alternative rock station KROX (101X) saw its audience share jump dramatically for no apparent reason.

• Much-discussed KGSR-FM, "Radio Austin," which switched its frequency to 93.3FM and tweaked its format to add more classic hits, finished a solid but unspectacular 10th in the August ratings.

Beyond the performance of the individual stations, radio executives are buoyed by the overall numbers, which suggest a much larger audience for radio than reported by the diaries. And, unlike other markets, where PPM shows listeners bouncing from station to station, audiences in Austin are displaying loyalty to their favorite brands.

Of course, translating those numbers into revenue will still be a challenge for the struggling radio industry. The meters pick up radio signals but don't measure if the participant actually listened to the station. "Unless you can get them to listen for a reasonable amount of time, it doesn't make any difference to your ability to sell," Gillmore said. But the larger numbers and the more reliable system should at least help their cause. "It allows us to compete more with television," Gillmore said. "It will give advertisers more confidence."

Executives hesitate to make too much of the early numbers; the summer is a notoriously oblique quarter, with many listeners traveling and students out of school. But they are still breathing a sigh of relief, after months of anticipating the changes. Said Rupe, "We're just glad the anxiety is over." 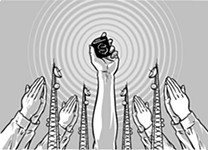