Campus-area residents take their turn in the city's neighborhood-planning spotlight. 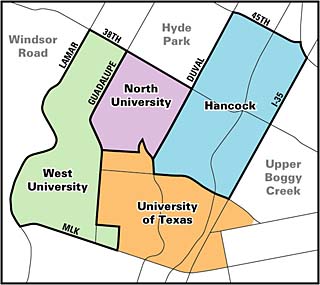 The Central Austin combined effort covers three neighborhood planning areas, which themselves include six registered NAs. The adjacent Hyde Park and Upper Boggy Creek neighborhood plans were adopted in 2001 and 2002; Windsor Road, to the west, has yet to begin planning.

The six neighborhoods comprising the Central Austin Combined Neighborhood Planning Area cover a large swath of land dotted with historic structures worthy of preservation, enormous student-housing complexes, and rustic subdivisions, as well as popular destinations like Spider House, Wheatsville Co-op, and the Posse East (and the offices of The Austin Chronicle). Its inhabitants include students totally clueless about municipal affairs, as well as some of the most sophisticated and politicized residents in town. In the past few months, residents, developers, and the city have been meeting to bring these disparate elements together into a neat, rezoned package -- a process that many participants say is necessary to preserve the neighborhoods' unique qualities and help the area absorb growth gracefully.

So far, the planning process is unfolding smoothly, says Ricardo Soliz of the city's Neighborhood Planning and Zoning Dept. Though he expected the area's first planning workshop several weeks ago to be tainted with animosity and rock-throwing, "It wasn't like that at all. But I think once we start getting into rezoning of different properties, the tone will change." (A second workshop was held Tuesday night.)

Last spring, when the City Council approved megadense multifamily zoning (MF-6) for the Villas on Guadalupe, the upscale student-housing complex being built adjacent to Blockbuster Video's store on the Drag, many area residents became very worried about their neighborhoods very fast. Villas opponents, led by members of the North University Neighborhood Association, mounted a stout opposition to the complex, and when the council approved the developers' zoning request on a 4-3 vote, neighbors were left feeling both scorned and suspicious. To some extent, that sentiment remains, though residents say they're trying to work with the city in good faith.

"As far as overall planning, NUNA has the reputation that we pretty much argue over everything," says NUNA President Rick Iverson. "That's the way we are, but we're not unique." Iverson believes the city should pass a moratorium on construction of both super-sized complexes like the Villas and "hyper-duplexes" -- enormous structures, technically legal under single-family (SF-3) zoning, but designed to accommodate as many as a dozen (student) renters -- throughout the neighborhoods. Currently, a duplex project underway on Hampton, near Lee Elementary in the Hancock neighborhood, has several residents upset. And on Cedar Street, in the heart of the NUNAhood, a developer with significant holdings near campus has talked about building a garage structure and "packing it with kiddos," as Iverson puts it.

"Any neighborhood can have this done to them, but around UT it's worse, because there's a market for these things," Iverson continues. Mindful of that, NPZD and the Planning Commission are working to address the issues -- like parking and aesthetics -- raised by these big-box buildings, Soliz says.

Iverson and other NUNA leaders are "cautiously optimistic" about the neighborhood-planning effort -- "Things might be a lot worse without going through this process." But some others are pessimistic about the long-term prospects for their neighborhoods. Eastwoods NA member Barbara Epstein, who spent several of her 27 years in the neighborhood as NA president, believes the planning group was "defeated before it even started." She points to the city's decision to deal with six neighborhoods as a unit: "They have us clumped in with Hancock. We asked before, 'Why did you do this?' At very outset, it doesn't seem the city's listening to the neighborhoods."

Many problems Eastwoods and other neighborhoods in the area face won't be addressed by a neighborhood plan, Epstein says -- for instance, developers who defeat valid neighborhood petitions against the zoning for their projects, as happened with the Villas. In such situations, neighbors worried about aesthetics and rising property taxes have little chance of winning against developers who can argue, as did the Villas, that they're increasing housing options in the UT area and getting people off the roads. "Get a Villas in Eastwoods, and people will leave," she predicts.

To help stave off development that residents find unattractive and to preserve the neighborhood character, several NAs within the planning area -- including Eastwoods and NUNA -- would like to establish Neighborhood Conservation and Combining Districts, a seldom-used and occasionally abused code option that's designed to protect historic neighborhoods and that has much sharper teeth than the neighborhood plan by itself. Just to the north, Hyde Park wrote an NCCD to implement its neighborhood plan, and to help "grease the skids" (in Iverson's words), NUNA has hired Hyde Park Planning Committee Chair Karen McGraw as an adviser. "We're going to try to get NCCD over as much of the neighborhood as we possibly can," he said. Several NUNA residents are compiling a library of digital photos and other information on historic buildings in the area.

The actual Central Austin Combined Neighborhood Plan should be ready for consideration by the PC and City Council in August or September. Soliz admits that the final outcome of the planning process won't satisfy everybody. Some up-zoning will be "inevitable" -- particularly in West University -- while other areas will probably be down-zoned from commercial to residential. Another challenge will be addressing a potential light-rail route through the area and the accompanying higher density along the rail corridor. (The other two areas in the current round of neighborhood planning -- Crestview/Wooten and North Burnet/Gateway -- were also chosen for their proximity to currently proposed rail routes, and several already-adopted neighborhood plans, particularly in East Austin, tackle the issue.) In the next few months, Soliz says, Capital Metro will conduct several workshops to collect input on station and streetscape design.