The Lights Are On: Is Anybody Home?

Beaten at the Jailhouse?

An Austin woman claims a misdemeanor arrest led to a beating at the hands of Travis Co. jail guards

Campus-area residents take their turn in the city's neighborhood-planning spotlight.

Here Come the Judges -- Again: Round Two for Owen, Pickering

Burnam Says No to Craddick

Every Officer Does His Duty?

The deficit explodes and the Lege convenes

Mayor Pro Tem Jackie Goodman declines to run for the job itself.

A magazine for the people outside the CEO suite; and drug companies get Bush to help them kill babies. 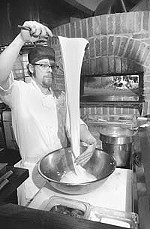 Vespaio has always been good -- now, it's better.

Virginia B. Wood has news from across the land.

Up all night? Hungry? Literate? Then read on.
music 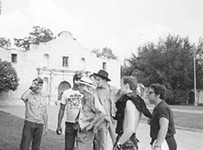 At the crossroads of the Clash and the great state of Austin, Texas.

More on the Antone's merger, the noise ordinance, and finally, Abra Moore.

The Fifth Generation: Chinese Films of the Past Two Decades

An institution unto itself, the DVD commentary track can provide insider dish, impressions of mommy, and the startling depths of one movie star's know-how (or lack thereof).

In a move that's certain to anger nonexistent film critics both in Austin and the world over, the Federal Trade Commission announced last week they'll be undertaking a review of how endorsement blurbs can be used in promoting films.

TiVo takes the stand in the last of "TV Eye"'s recent examination of new TV-watching and -recording technology.

Not long after starring in two of the wildest blaxploitation films of all time -- Coffy and Foxy Brown -- Grier's career went in a much tamer direction.

In Praise of Love

When he's not covering canvas with acrylic-based images of Japanese toys and Italian scooters and good old American action-figures, Tim Doyle dabbles in the art of the comic book, distilling his day-by-day existence into three black-and-white segments each in monthly issues of Amazing Adult Fantasy.

It's time again for that annual performance jamboree FronteraFest, and time to mark its first decade of presenting Austin with adventuresome new theatre, comedy, dance, and spoken word by anyone with the courage or folly to take a stage.

Dances With Dogs (And Their Masters)

The extraordinary new opera Dead Man Walking takes its audience on a journey from a place of horror and abhorrence to one of comprehension and compassion, a place where we may see the humanity of a murderer, and in Austin Lyric Opera's potent production we feel each step taken on its long and stony way.

The celebrated 19th-century actress Fanny Kemble possessed the courage both to stand on a stage and speak as someone else and to stand on principle and speak up for someone else, as we learn with admiration and delight in the Pollyanna Theatre Company's production of Shame the Devil.
columns

Next Tuesday's Creating a Liveable 6th and Lamar: Community Forum, meant to address the proposed Borders store at Sixth and Lamar, raises the complexity of issues involving economic choices, and the lack of a clear right or wrong.

The Style Avatar goes JetSet and koo-koo for Christmas trees! See within ...

Sometimes when I take my vitamins late at night I have trouble getting to sleep. Why is that, and which ones are most likely to do this?