Will Council Take a Stand on PATRIOT Act?

Mayor Pro Tem Jackie Goodman believed her resolution against the USA PATRIOT Act would pass with little resistance or hesitation from her six City Council colleagues. After all, the resolution represents the kind of progressive-minded, grassroots-driven position that City Hall claims to support -- just as the council declared its opposition to war in Iraq last winter. But at the Aug. 7 council meeting, Goodman's resolution stalled when other council members requested additional information -- and raised questions as to its local relevance. The council will take up the item again during its meeting today (Aug. 14), with a briefing and public comment period followed by a vote.

Goodman regards the PATRIOT resolution (co-sponsored by council members Danny Thomas and Raul Alvarez) as a reaffirmation that Austin supports the U.S. Constitution and the Bill of Rights. Civil rights advocates assert that the PATRIOT Act, passed hastily in the aftermath of the September 11 attacks, traduces those two documents by enabling the feds to initiate searches without warrants, spy upon Americans, and criminalize dissent. Goodman has read both the existing PATRIOT Act and its proposed sequel -- a broader measure that would make some of PATRIOT's "emergency measures" permanent -- and is both shocked and worried by their "looseness" of language. "For me, it's just the principle of the thing," she says of her resolution.

But Mayor Will Wynn and others are lukewarm. Though supportive of the resolution's philosophical underpinnings, Wynn has requested evidence that the PATRIOT Act has directly affected the way city departments run -- particularly the Austin Police Dept. and the Austin Public Library -- and had an impact on the city budget. Prior to Thursday's meeting, he announced on the radio that the resolution didn't qualify as "the city's business."

Some city staffers also seem ambivalent. Last Thursday, Assistant City Manager Laura Huffman, who oversees public safety, told the council that "nobody's altered their operations" since the act was passed in October 2001. "It's not a surprise to us." Assistant City Attorney Brad Norton backed up Huffman's assertion, explaining that he had determined that the PATRIOT Act did not give the city any new powers to detain or spy upon its citizens. PATRIOT has undoubtedly given law enforcement agencies new tools to obtain search warrants and court orders, interrogate and detain people, and surreptitiously collect information on potential terrorist suspects, he said, but the FBI and the Dept. of Justice will benefit from those new tools -- not APD.

Nevertheless, communities across the country have passed resolutions condemning the PATRIOT Act due to its vague language and potential for repression. Locally, the Austin Bill of Rights Defense Committee and the ACLU of Texas have argued it is the council's duty to address the PATRIOT Act due to its apparent undermining of citizens' rights. The two groups also worry that some of the $19 million spent by City Hall on homeland security since September 11 has been applied toward collecting information on antiwar activists -- notably during this winter's rallies against the war on Iraq.

ACLU of Texas attorney Ann del Llano says it would be preferable to win a unanimous vote on the resolution, rather than a lukewarm 4-3 endorsement. Del Llano says she's "proud" of Goodman for taking on PATRIOT -- even though personal politics have played a factor between the two women. Last year, del Llano represented political activist Linda Curtis -- at the time, a candidate for Goodman's Place 3 seat -- in her lawsuit challenging the validity of the petitions Goodman submitted to bust term limits. Del Llano says her past differences with Goodman haven't resurfaced during the PATRIOT effort, but the mayor pro tem told us last week that she's been communicating with del Llano via her office staff and through ABORDC leaders such as Debbie Russell, who also serves as Goodman's appointee to the Urban Forestry Board.

Some ABORDC members are critical of Goodman's advocacy of the resolution, saying she hasn't shown enough resolve in informing her colleagues about the PATRIOT Act and the growing national campaign against it. While claiming to have worked on the resolution for over a year, Goodman didn't provide a draft to her colleagues until the day before the council meeting. "Jackie wasn't pushing [the council] with anything hard," said one ABORDC member. "It's frustrating."

In general, the PATRIOT resolution hasn't generated nearly as much controversy among the populace as did the February resolution on Iraq, which passed on a 4-3 vote. Council Member Brewster McCracken, who has echoed the mayor in arguing that the budget comes first, said Thursday that his office had gotten only 59 e-mails about the resolution; an item regarding the Caswell Tennis Center generated more response. Alvarez's staff noted that only 55 people had contacted them regarding the PATRIOT resolution -- but that only one of those 55 was opposed to it. 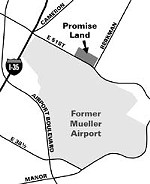