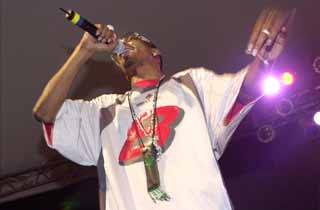 Stubb's, June 7 Local openers DJ Mel and Worldwide Souljahs were long gone by the time Snoop Dogg swaggered onstage for a 30-minute set. Surprise guest and Dogg Pounder Daz Dillinger held it down for the non-fashionably late Top Dogg, who brought the "Lodi Dodi" pre-party and huge smoke cipher onstage after making the extremely sold-out, underage crowd wait in a post-thunderstorm sauna for over an hour. Chromed-out shades and a rhinestone goblet filled with his favorite beverage, gin and juice, was the select wardrobe for the strutting supastar, who immediately presided over a site he interpreted as "Spring Break Cancun." The chaos was contained as Snoop turned over-anticipation into instant excitement, handling Austin's undeniable need to hear classic Chronic material. It was "Nuthin' But a 'G' Thang," for the DPG (Dogg Pound Gangsta), satisfying the masses before having a deceased duet with the voice of Tupac for a "2 of Americaz Most Wanted" gangsta party. Then, as the venue's 11pm curfew approached, Stubb's was ready to shut down, but Snoop had just gotten started, and had much more to say, especially to the onlooking security forces. With a blunt in his mouth and both middle fingers flying high, he told the crowd that although Stubb's wanted him offstage, they obviously didn't know who they were messing with, protesting, "I'm Snoop muthafuckin' Dogg" (who, by the way, put in a two-hour extravaganza at the Austin Music Hall last January). The crowd joined in the short-lived protest against authority, middle fingers in the air, before a finale to recognize what's his name, Snoop Doggy Do-o-o-o-g-g.