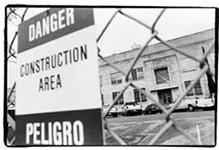 You Call This a Plan?

Must Stan Take the Stand?

Questions about the APD's disciplinary sanctions mean the chief might have to take the stand.

Save Our Speck Alliance

Larry Speck is the main architect of the Hill Country Galleria. He's also a member of the Save Our Springs Alliance board, which opposes the Galleria. This is what you call, "walking the tightrope."

The Texas Green Party holds its convention in San Marcos.

GHASPing for Breath in Houston

Not Exactly a "Green Light" for Stratus

The Texas Republicans Gather in Dallas to Pray

Austin @ Large: Out Into the DAMP

The Downtown Mobility Plan has critics from both the right and left, and that could be its undoing.

The "outernet industry want advertising on the inside of your eyelids; WorldCom moneyslinger Bernie Ebbers dies by his own gun; and the un-American activities of Stanley Works.

What is it about Texas and barbecue? Chronicle Food Editor Virginia B. Wood knows, and she knows we know, but the Southern Foodways Alliance is about to find out on their Taste of Texas Field Trip. Plus, "The Barbecue Song"!?

Food Editor Virginia B. Wood has news from Central Market Cooking Schools and restaurants reinventing themselves in this week's "Food-o-File."

Dee Dee's dead, everything else is crumbling.

Westway to the World

A Good for a Good Time
screens 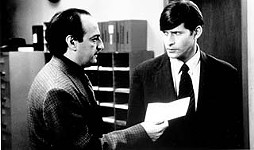 Tyro film director Jonathan Parker brings "Bartleby the Scrivener" back to the future. And who better to ride shotgun than freaky, geeky Crispin Glover?

In its continuing endeavor to be coolest enterprise in Austin, the Alamo Drafthouse served up BBQ, Baby Ruths, beer, and Corey "Mouth" Feldman at last weekend's Ultimate Goonies Experience.

Flicker's Got Super-8 for a Super Dad

How to buy Dad a beer for his special day but still avoid the Hooters' cliché.

The TNT action-adventure show Witchblade strikes out with its Groundhog Day-like season premiere, while HBO hits another one out of the park with cop drama The Wire.

More Than Just the Facts, Ma'am

The Bob Bullock Texas State History Museum's exhibition on Davy Crockett features a short stage show with the hero of the Alamo appearing live and in person. The two Austin actors who alternate in the show describe how they bring that King of the Wild Frontier to life day in and day out.

Twelve local art enthusiasts are the first to be inducted into the Austin Arts Hall of Fame.

The Manhattan Transfer with the Austin Symphony

The four accomplished vocalists who comprise the Manhattan Transfer turned an evening with the Austin Symphony at the Austin Convention Center into a night when "there was magic abroad in the air."

New Texas Music Works closed the 2002 New Texas Festival with some tremendously talented ladies -- sopranos from the Conspirare Choir -- singing a variety of material, but for all its warmth, the concert lacked the sustained intensity and interest that is the hallmark of the choir's best work.

With its presentation of sacred choral works by early 20th-century German composer Hugo Distler, the Conspirare Choir put its versatility on best display and provided a sequence of absolutely divine sounds.
columns

Our cover story delves into the complex legacy of Townes Van Zandt, an artist who cared more about music than business, who literally lived his whole life for the sake of the song.

I am 68 years old, and I can't decide how best to delay the aging process. I exercise some, eat sensibly, and take a multivitamin. What else works?

Learning about "manhood" from the movies