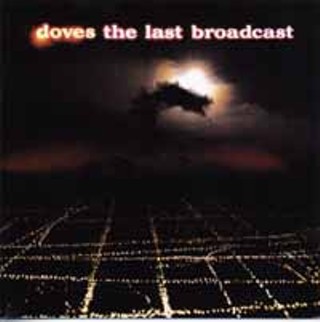 The Last Broadcast (Capitol) Is The Last Broadcast the most consistently breathtaking sophomore UK release since Radiohead's The Bends? If not, it's awfully close, this stunner being an infectious, melancholy, ultimately euphoric barrage of sound wrapped in a sheeting of guitars and subtle effects that coalesce around frontman Jimi Goodwin's plaintive voice and brothers Jez and Andy Williams' lovely, pounding, relentless vibe that echoes with hints of Northern soul and terrifically big beats. First single "There Goes the Fear" is awash in the same sort of unstoppably catchy guitar groove that marked U2 in their finest hours, while the mammoth, chiming riffs of "Pounding" seem tailor-made for summer stadium dates, complete with an unflappably uplifting chorus that radiates goofy grins all around. If that were all, it might be enough, but The Last Broadcast is brilliant, wandering all over the musical map from the folky lo-fi vocals of "M62 Song" (props to Nick Drake anyone?) to the feedback-drenched "NY," which wouldn't be out of place on some great, lost Jesus & Mary Chain album. There's not a bad spot on the album, 12 tracks that taken as a whole make up the most exhilarating UK rock album in years.