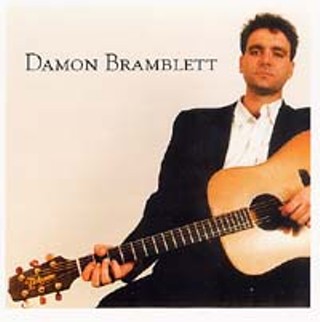 The cover art for Damon Bramblett's self-titled debut disc is direct and unadorned: a shot of the rawboned local country singer in a dark suit, playing an acoustic; on the back, the rusty frame of a revolver, a drawing of a housefly, and a log chain set across a piece of burlap. It's a perfect complement for this release, fitting nicely with Bramblett's plainspoken, real-world lyrics, and matter-of-fact tenor. Producer Lloyd Maines graces the release with some elegantly simple instrumentation, recruiting Austin rockabilly regular Kevin Smith on bass and contributing his own steel guitar work. Bramblett's driving acoustic guitar and vocal twang call to mind Woody Guthrie at times, but his lyrics are a different matter, songs about small-town desperation and loneliness, abandoned drive-in theaters, and convenience store hold-ups, somehow oblique and to the point at the same time. Bramblett has an eye for the forgotten, the worn-out, and the downright ugly, then picks them up, dusts them off, and lends them dignity through his lyrics and melodies. "Champaign, IL" breaks with the folk-country feel of much of the rest of the CD for a fusion of jazz and blues and a piano lurking around the edges; "Today I Started Drinking Again" has a light, upbeat touch that contrasts with the glum lyrics. Bramblett has put out a minimalist gem of a CD that showcases his songwriting and vocal skills without upstaging them, skills that are head and shoulders above most of the rest of the pack.