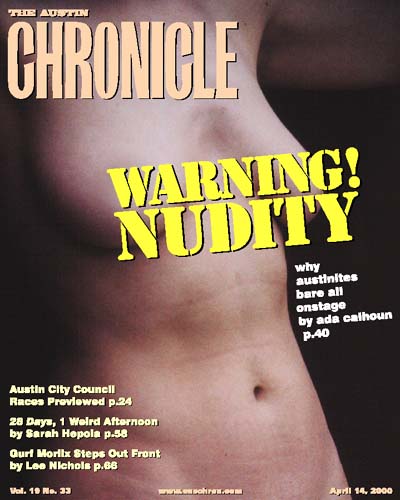 Wayne Alan Brenner might be the only fool alive who actually digs getting shoved into one of those terrible tubes for an MRI.

Council Contenders Race to the Finish

In the Place 5 Race, Activism Is the Operative Word

Willie or Won't He?

Rainey Neighbors Debate the Future of Their Neighborhood

Trout Unlimited works to convince the Guadalupe Blanco River Authority not to increase the amount of water it releases from Canyon Reservoir, which the group says would harm a fragile trout fishery.

Four candidates compete for the Place 7 position on the Austin Community College Board, which Hunter Ellinger is vacating.

Too Big for Our Bridges: Will Pedestrians Take Back Seat to Traffic? That's an Easy One

What you may miss at Gilligan's is the little epiphany that can come when the kitchen and the wine list are singing in-synch, playing off each other's strengths and idiosyncrasies, Chronicle wine critic Wes Marshall discovers.

"For some time now," Virginia B. Wood writes, "I've had this fantasy about putting advertisements in selected East Coast newspapers to entice Italian immigrant or Italian-American bakers to relocate to River City and bake their wonderful breads for me. And for you, too, of course."

Virginia B. Wood urges interested readers to get involved in the local chapter of Women Chefs & Restaurateurs, gives details about the Wine & Wildflower Trail, and updates readers on local restaurant news.

Detailing the still-wet merger of Doolittle and New West Records

A Time of Recognition

BY VICTOR BOCKRIS AND JOHN CALE

Aqua Fest seems unlikely, but there's plenty of other summer fun to be had; the Austin Music Network is a bit of a mess.

Doug Sahm Hoot, Live at the Hole in the Wall

Jamie Was a Boozer

The Patron Saints of Wheless Lane

The Sound of One Psycho Cracking

Tarzan and the Lost City

Where the Money is 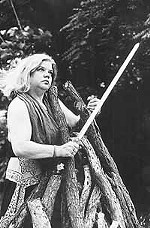 Austinites love to shed their clothes, and a number of them do it onstage -- what's up with that? Some of the city's most nakedness-prone actors, performance artists, and directors expose their reasons to arts writer Ada Calhoun.

A spring full of architecural blooms.

The familiar misadventures of the wooden puppet who wants to be real get a high-spirited comic treatment in JohnnySimons' Pinocchio Commedia, and Tongue and Groove Theatre's spirited and playful production make the hundred-year-old tale delightfully fresh.

One Theatre Company has smartly produced Weldon Phillips' delightful, zippy, and merrily rakish play, an adult-oriented fable of love under the big top.

Inspired by the sonnets of Shakespeare, the seven plays in Love's Fire are the confession of a love affair with language, and this Mary Moody Northen Theatre production passionately voices that confession with the help of a vigorous young cast of St. Edward's University students.

In the new solo show Bucky, playwright / director Alice Wilson and actor Brad Armstrong celebrate the life and work of Buckminster Fuller with energy and fervor, but their show is not for everyone : certainly not for anyone who dislikes audience participation.
columns

Debra Schmidt's custody case leads the concerns in this week's Public Notice, jam packed will all sorts of benefits and the like..

Coach goes the Davis Cup quarterfinals at the Great Western Forum in L.A.