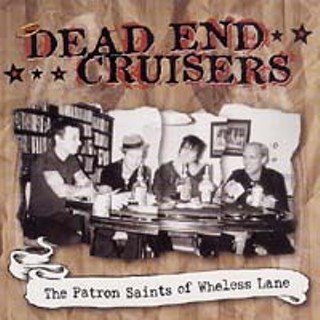 The question "What happens to punk rockers when they get old?" remains largely abstract, mostly because the only examples to date are Iggy Pop's inadvertent self-parody and Johnny Rotten hosting a talk show on VH1 (talk about pretty vacant). "I feel like an old man today, a bruised and bloody Saturday," announces Dead End Cruisers singer/ guitarist Nick Curran on "Another Night," the leadoff cut on The Patron Saints of Wheless Lane. One song later, he's wondering, "Has anyone noticed that we're still around" in the midst of recounting nightclub horror stories. Yes, we have; the Cruisers remain one of the perennials of the Emo's/Trophy's wallet-chain set. Patron Saints is mostly about The Life, a DiY assortment of cheap buzzes ("Nyquil Sweats"), selling T-shirts ("Friday Nights"), broken-down vans ("Contracts and Courting"), and early Two-Tone memories of Roger Moore and CHiPs ("First Kisses"). Locked in a Mexican standoff with early middle age, the Cruisers manage to rub enough Ben-Gay into their kick-out-the-jams arrangements to please fans of the Supersuckers, Replacements, and Clash alike. This is punk from squarely before Green Day made it palatable for the PlayStation generation, though there are disquieting similarities to Blink-182 on "It's Gone." It's tough being punk rockers in a boy-band world, but then again, there does seem to be plenty worth lashing out at these days, both inside Garageland and out.