The East Side Compost Pedallers team has become a staple member of the Austin sustainable food system less than one year since its birth. The stated mission of Dustin Fedako's brainchild is four-fold: sustainability, community, simplicity, and creativity. May is National Bike Month, and with the first tomatoes of the season ripening, it is prime time for the Pedallers.

Last week, the Austin City Council voted unanimously to expand the universal recycling ordinance, requiring all Austin restaurants to start composting by 2017 (restaurants larger than 5,000 square feet only have until 2016). "We are proud and honored to live and operate in a city with such progressive goals around waste reduction," says Fedako. "[The ordinance change] is a massive step towards a zero-waste Austin, and we are excited to play our part in redirecting those organic resources to enrich our soil and our community." The Zero Waste initiative aims to make Austin waste-free, with one specific goal of reducing the amount of trash sent to landfills by 90% by 2040. Although all restaurants will be required to compost, the method has not been mandated. Other Austin businesses provide composting services, such as Break It Down Austin and Green Thumb Compost, but so far the Pedallers are the only business to actually pedal their loot.

Four regular Pedallers ride three specialized Metrofiets cargo bikes (personalized with names like Lily) throughout the area from Manor Road to I-35 to Wilshire Boulevard to Berkman Drive, transporting heaps of organic waste. Once individual bins are picked up from customers' front doors each Friday morning, the collections are weighed and added to the big bike buckets. Several partners, including Springdale Farm, Urban Patchwork, and the University of Texas' Concho Community Garden and Micro Farm, use the material for compost, and in turn, for growing more local food. ESCP is also on site every Sunday at HOPE Farmers Market and Mueller Farmers Market, engaging in community outreach and collecting compost. The Pedallers' website includes a large list of acceptable and unacceptable items for the bins, such as the predictable fruit peels, veggie scraps, stale beer, and old bread. But many of the green-lighted trash-turned-treasures are rather surprising: the contents of your vacuum cleaner, nail clippings, receipts, and even nonglossy junk mail. To protect compost quality, there are a few restrictions – no meat or dairy, for instance. The airtight lid reduces odors and keeps pests (and curious pets) at bay. 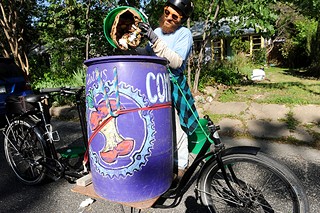 Because ESCP's transportation method burns only Pedaller fat, the entire process uses zero fossil fuels – meaning zero emissions. Additionally, the ESCP service contributes to a reduction in methane. Since December, the Pedallers' business has prevented 1.71 tons of methane from being released to the atmosphere. Landfills emit approximately one-third of the methane produced in the United States, thereby increasing toxicity via greenhouse gasses and decreasing air quality. The anaerobic conditions (standard for landfills) are created by combining organic material (such as compostable kitchen scraps) with nonbiodegradable items (such as old computers or even plastic bags); the resulting scenario blocks the natural decomposition process, sometimes for decades. By composting organic material, carbon dioxide forms instead. A variety of methods can reduce methane production, but none are as simple or inexpensive as throwing banana peels into a bin in the kitchen.

The new ESCP zine (also available in digital format), illustrated by Fedako, states, "The average American throws away 4.43 [pounds] of trash every day," and specifies that 30% of garbage is actually compostable. ESCP coined a term for this valuable resource: Scrapple is "compostable food scraps and other organic materials," or gardener's gold. The natural fertilizer is essential for producing locally grown food without the use of pesticides or chemicals on urban farms and community gardens. Since their first scrapple collection ride in December 2012, the Pedallers have prevented 11,104 pounds of scrapple from reaching the landfill, created 2,776 pounds of compost, saved 747 gallons of diesel fuel, and burned more than 60,000 Pedaller calories. For $16 per month, residential customers become members of the ESCP resource cycle and receive a green airtight compost bin, weekly bin cleaning service and collection, a personalized impact stats card, and a yard sign – with all services delivered on those beloved bicycles.

In addition, last week ESCP launched their new rewards program, the Loop. For every pound of compost, customers receive one point, redeemable for prizes. T-shirts, Homegrown Revival tickets, even a free bicycle are offered by 12 local businesses, including East Side Yoga, Cherrywood Coffeehouse, Windmill Bicycles, and Austin Daily Press. In.gredients, a package-free, zero-waste grocer in East Austin, also participates. The team plans to incorporate more businesses as the service area and company grow, with the specification that the new organizations chosen to participate are accessible by foot or bicycle and are "embedded in these new service areas." Since the kick-off contest in October 2012, in which votes from Austinites chose Cherrywood as their first route, the Pedallers' waiting list of neighborhoods eager to participate has grown steadily. Expansion is certain with "plans to open service to [the] Holly neighborhood in May," but keeping the operation close-knit and manageable is the top priority. Fedako reiterates, "Keeping the Loop close to home is just another way we are creating the conditions for Eastside communities to grow."

Community is an enormous slice of the Pedallers' pie, and the company set its headquarters in East Austin, where the Pedallers roost, because of a heartfelt desire to facilitate neighborly conversations. "Of course we are a composting program, but we are also all about community." Fedako is also a co-founder of the Food Is Free Project, a gardening nonprofit focused on reforming the agricultural system by encouraging neighborly conversations and building front yard food gardens with salvaged resources and harvests open to anyone. Since becoming a Slow Money Austin Spring Pitchfest finalist, Fedako says, "We had a lot of great preliminary conversations with potential investors at Earth Day Austin and plan to meet for further discussion in the coming weeks. We are also applying for a grant from the city of Austin's Urban Agriculture department as well as the upcoming RISE Social Good Fast Pitch Competition."

Where entrepreneurial spirits meet genuine concern for community and environment, we find the Pedallers engaging East Austin. The personality of the Pedallers shines through in every endeavor – from business cards fashioned from upcycled cardboard food boxes and an active social media and Vimeo presence to Good Samaritan deeds. East Side Compost Pedallers will gladly take your scraps, but no bones, please.