The Way of the 'Food Forest'

Locavores planting seeds for the next phase of urban agriculture 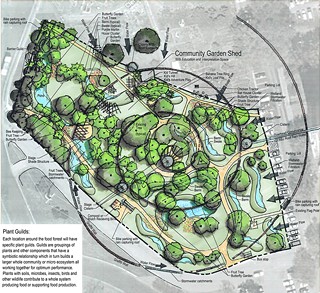 As green initiatives increase in popularity, the city of Austin maintains a complex relationship with urban agriculture. Many urban farm advocates viewed the controversial update to the urban farm code – which failed to include a proposed provision allowing for the processing of animals in single-family zoning – as a step back from sustainability. Then there are the new plans for Austin's first indoor farmers' market – planned for 1100 East Fifth Street and facilitated by a potential $333,829 city loan to development group 11E5 LLC – which have left at least some local farmers wondering if the city cares more for developers than producers. However, as farmers navigate the changing landscape, community organizers and grassroots activists are rallying around a new wave of guerrilla gardening – a food forest – in hopes of cultivating community growth and empowerment while increasing access to healthy food.

Modeled after the Beacon Food Forest in Seattle, the proposed East Feast Festival Beach Food Forest pilot project is slated for the south side of the Festival Beach Com­mun­ity Garden, just east of I-35 at Waller Avenue and Clermont Street on the north shore of Lady Bird Lake. Roughly 2.15 acres of land would be reimagined into an edible landscape, complete with fruit trees, a butterfly garden, kids' play structures, and a stormwater wetland filtration system, in addition to other features. Though hardly a new concept – there's a 2,000-year-old food forest in the Moroccan desert – a food forest will certainly be new to Austin, providing an additional layer of sustainable food production.

The idea took shape in the fall of 2012 as a result of community conversations initiated by the Parks and Recreation Depart­ment as part of the 90-acre Holly Shores/Edward Rendon Sr. Park at Festival Beach Master Plan. Holly neighborhood resident Elizabeth Walsh, concerned that the needs of the neighborhood were not being addressed, attended public meetings and began having conversations with her neighbors about the plans for the area. Residents indicated a strong interest in passive, edible landscaping. 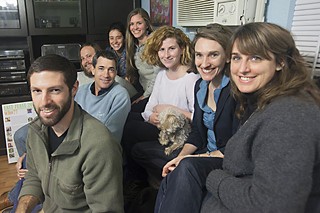 For Walsh, one of the greatest joys of the food forest project has been seeing the way it inspires such a diverse range of people, from neighborhood seniors to environmental justice advocates looking for ways to expand food access. The East Feast Coalition came to fruition in November 2012 when 20 people representing different parts of an emerging sustainable food system in East Austin gathered in Walsh's backyard. These groups included the Festival Beach Community Garden, the East Side Compost Pedallers, Urban Patchwork, HOPE Farmers Market, and Sustainable Food Center, among other groups and individual community members. Once established, the coalition began working with PARD to include edible landscaping in the master plan. As a result, "Community access to healthy foods through sustainable community agriculture" appears as one of the top nine priorities in the proposed final plan; specifically, the recommendation calls for sustainable edible landscaping near the Festival Beach Community Garden.

In preparation for the food forest, the city's Community Transformation Mini-Grant through the Sus­tain­able Urban Agriculture & Community Gardens Program supported a series of public outreach and engagement sessions last summer. The first three were Bus-Stop Garden Parties where organizers and attendees gathered to build wicking bed gardens and bus benches for the 21/22 bus line near Metz Elementary. The sessions culminated in an Aug. 11, 2013, design workshop attended by more than 50 community members at the nearby Rebekah Baines Johnson Center, an independent living facility run by nonprofit Austin Geriatric Center; the food forest will join the Festival Beach Com­munity Garden in complementing and supporting the RBJ food pantry. Landscape architect Mitchell Wright, along with perma­cul­ture designer Chris Sanchez created the final plan for the forest; the entire collection of ideas from the meeting were arranged within the plan. Wright is working pro bono on the project. "It was a beautiful challenge for me to assemble the master plan with so many wonderful, spirited ideas," he says. "I was just the fortunate one that got the opportunity to draw it up." Next steps for the site include soil testing and completion of the permitting process. East Feast is aiming for an April dig-in date.

Though often perceived as a more feral form of a community garden, a food forest is actually highly organized, made up of tiers or families of plants with a symbiotic relationship, naturally contributing to a healthier, more productive ecosystem. These tiers, referred to as guilds, are integral to the overall health of the food forest as each component (soil, microbes, insects, birds, etc.) is essential. If done correctly, a food forest should be self-sustaining without the use of fungicides, pesticides, or herbicides.

Though the specifics are not nailed down, the idea is that people will have open access to what is grown on the site. Aided by educational signage to help people know what is available to eat and when, the concept is, more or less, "take what you will eat today." The community-supported forest is expected to be dense enough and to flourish sufficiently to provide food products on a regular basis. According to Walsh, "Permaculture is more than gardening; it's a philosophy, a style of living that is in harmony with the natural environment, a recipe book, and a medicine chest. Permaculture strives to re-create and/or augment natural patterns and systems that are already in place and predate us. It offers alternative economics of natural and social systems instead of imposing unnatural controls on our landscape that rely on artificial and often wasteful practices to sustain." The food forest is certainly ambitious, but with an almost 50-person waitlist for the Festival Beach Community Garden, the idea has thus far received widespread community support. Unlike the city's recent updates to the urban farm code, which polarized a community, most people seem to agree that innovative agriculture in public spaces is a good thing. One of the most outspoken groups against the proposed urban farm code, PODER, or People Organized in Defense of Earth and her Resources, endorses the food forest effort. In a letter of support, PODER board chair Janie Rangel writes, "Since the Holly Shores public process began, many neighborhood residents have been working with a growing movement to develop the food forest concept. Our public land can support much more public produce. Edible landscaping can help people reconnect with the source of their food."

If all goes well, the pilot forest will eventually expand, using underutilized spaces for edible landscaping and other beautification projects. "As we learn from our pilot project, we anticipate that there will be many opportunities to expand the food forest, or food forest patches, throughout the rich soil and wonderful parkland north and south of Lady Bird Lake," Wright says. "We have heard an overwhelming consensus among neighbors and stakeholders that we hope to preserve the natural beauty and tranquility of this treasured parkland."

The master plan was initially on the agenda for a Jan. 30 vote, but City Council postponed action until Feb. 27 to allow time for more community outreach. Though the forest is just one component of the larger plan, the Council meeting will include an opportunity for public comment, and East Feasters are asking those who support the food forest to tell Council why it is essential to the area. Says Walsh, "There are many reasons to grow food in the city: food security, food justice, building healthy communities, recreation, building skills, saving seed, providing wildlife habitat ... As the cost of living and populations rise, making the most use of available land to produce more food locally will become increasingly important."

Fundraising is also a priority, and East Feasters are currently scouting crowd-sourced fundraising campaigns and business partnerships. Eric Goff, co-founder of East Side Compost Pedallers, has already pledged his support to the project. "The food forest is a visionary educational opportunity that aligns beautifully with our mission to increase soil fertility and access to healthy food in Austin. As a show of support, the Compost Pedallers will be donating as much compost as we can to help get the project started," he says.

While a food forest won't take the place of better jobs for decent pay, like plant guilds whose cooperative work helps build a productive microecosystem, East Feast is certainly a step in the right direction. Says Wright, "Remember that this project is not just about food but about building relationships in the community; these go hand in hand – brothers and sisters finding common ground in fresh food abundance."