Bowie on the Big Screen

Looking back on the rare gems of the Diamond Dog

He never lost control: David Bowie in The Man Who Fell to Earth

Goblin King. Starman. Man of science. Prisoner of war. Everyone knows David Bowie was everything. But in cinema, he was often more than you knew.

It's hard to imagine that we live once more in a Bowie-less world. A world without the mime who became an art-rock hero, a queer icon, a stadium performer, and even the first Internet meme (ask your parents about David Bowie's Area, an early website dedicated to close study of his, well, crotch). He was a pioneer. He was an experimenter when he could have simply been an icon (did he need to make a drum and bass album in 1997? Define need).

And, in the midst of a music career that was the definition of epoch-changing, he also had the audacity to make the near impossible transition from musician to actor.

Now, it's totally acceptable for performers to be polymaths, with everyone from Björk to Beyoncé given (and carrying off) starring roles. But for decades it was a switch that was often at best effective stunt casting (Tom Waits in Rumble Fish), and at worst total stunt casting (Sting in winged pleather underwear in Dune).

And now, as the music industry remembers the shimmer and grime that Bowie bestowed upon them, film fans have been doing the same. Starting tonight with a double bill at the Blue Starlite Drive-In, and followed by a month of celebrations courtesy of the Alamo Drafthouse (see below), Austin will be absorbing the majesty of Bowie's cinematic career.

In many ways, the diversity of his films reflected his rainbow spread of a musical career. Think of the tragic, poignant Merry Christmas, Mr. Lawrence, as the cinematic cousin of "This Is Not America," or Christine F. as the Berlin trilogy re-created in all its sleazy, glorious brutality. As for Labyrinth, well, its impact on fantastical storytelling and the nascent sexuality of a generation can only be matched by "Space Oddity."

But for every headlining role, there's an underappreciated, understated Bowie performance: often forgotten, but like a gem in the cracks, still there to be discovered.

In the Seventies, Bowie was seen (often incorrectly) as the spokesman for libertine hedonism. As if in pointed rebuttal to this, he appeared in the BBC's adaptation of Bertolt Brecht's firey indictment of both dissolute artists and the middle class that plays with their flames, thinking that they won't get burnt. Bowie himself plays the snaggled, wild Baal in a performance that secured his credentials as a leading performer. Directed by Alan Clarke (Scum, Made in Britain), it was a deliberately stagey and formalized interpretation, bleak as a slag heap, sharp as Mack the Knife's stilletto. It also lead to one of Bowie's most obscure and thrilling musical adventures, the four track Baal EP.

It takes an icon to play an icon, and there's a certain elegance to Julian Temple's decision to cast the Thin White Duke as Drella himself, the shaggy, silver-maned Andy Warhol. As a supporting character in the tragic tale of Jean-Michel Basquiat, Bowie was unafraid to make the quasi-mythical pop artist into the most uncharismatic and pecunious version of himself. It would have been easy to make Warhol larger than life: Instead, Bowie keeps a certain refined drabness about the man (read our original review here).

Arthur C. Clarke once said that any sufficiently advanced technology is indistinguishable from magic. That's the reason why scientific visionary Nikolai Tesla appears as the man behind the machine in this stage magic mystery. There's a tired tragedy to Tesla, as portrayed by Bowie, ruminating on the cost of obsessively trying to build a better world, that speaks both to the lost genius of the Serbian master of reality and Bowie's own perennial status as a beloved outsider.

"If nobody had any objections, I believe I might be of service." Cameos are one of the oldest trick in cinema's book, but when David Bowie – as David Bowie – steps in to judge the runway walk-off ("old school rules"), it makes delicious sense. Why would Bowie be in a lousy underground club, waiting for Owen Wilson and Ben Stiller to challenge each other to a ridiculous display of preening? Because he's Bowie, and he's everywhere. In arguably the silliest sequence in an already very silly scene, it's Bowie's serious moonlight responses to acts of farce that justify, eh, much of the film's existence.

Not technically a Bowie performance. In fact, not a Bowie performance at all. But does anything in cartoon history make more sense than the man that created Ziggy Stardust actually being the Sovereign, the shape-shifting leader of a global confederation of supervillains called the Guild of Calamitous Intent? No, of course it doesn't. 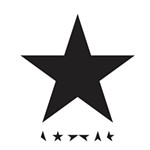 David Bowie’s Auto Memorial: Blackstar
Swan song LP admits “I Can’t Give Everything Away” but almost does