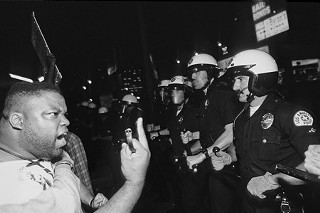 Not for the squeamish or the faint of heart, Uprising: Hip-Hop & the LA Riots is a very close-up look back at one of the darker chapters in late-20th century American history: the 1991 police beating of Rodney King and the 1992 riots in inner-city Los Angeles.

Director Mark Ford explores the era through the lens of the then-exploding West Coast hip-hop movement, calling on the songs of NWA, Ice T, and Dr. Dre to make the argument that the L.A. riots weren’t a spontaneous response to a single incident of racism but the inevitable result of decades of institutional brutality and long-simmering rage. What Ford’s film lacks in journalistic objectivity it makes up for in access (both to brutal archival home video footage and the remembrances of major players) and the controversial belief that the riots – like the music they inspired and were inspired by – were, in the end, the wail of a long-ignored community finally being heard.

Uprising: Hip-Hop & the LA Riots screens Friday, March 26, 9:45pm, at the Alamo Lamar. It will also air as part of the award-winning VH1 Rock Docs series.