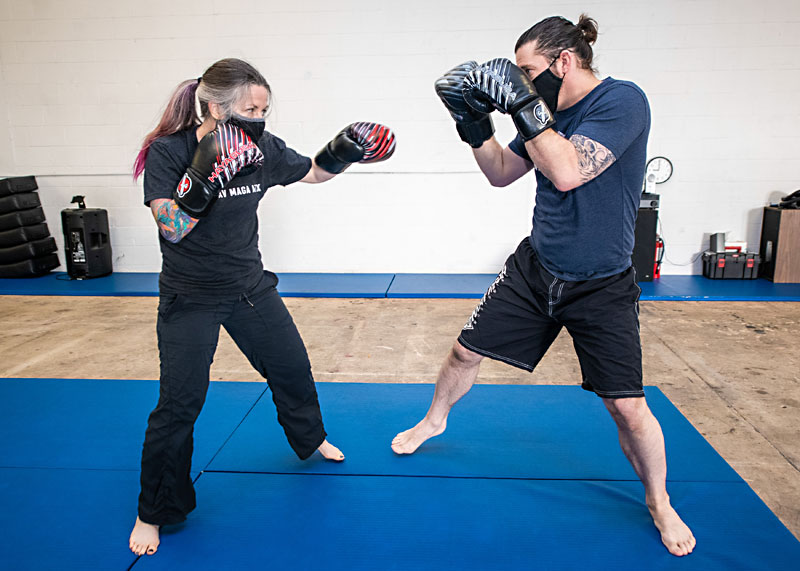 Ten years ago I turned my back on life as a coward and a layabout to learn how to fight. That I began my education with the self-defense system Krav Maga felt both arbitrary and written in the stars. I just happened to have a friend whom I'd learned was an instructor at a Krav gym in South Austin at the very moment I was contemplating signing up for a martial arts class, but surely it was no accident that the martial art that made itself so available to me was developed by an Eastern European Jew to beat back Nazi street thugs in the 1930s. My lifelong feelings of ambivalence toward fighting were inextricably tied up in my being a Jew raised with the knowledge of his people's near-extinction by forces of incomprehensible cruelty and my lingering, blood-borne dread of those forces, and were given fuel by the battle between my concern (long taught) that violent responses to that cruelty would mean my people were no better than the monsters arrayed against them and my forever fantasies about crushing those monsters to death with my hands, regardless of its meaning.

The neurological paradox at the heart of fighting remains the same: Putting yourself under stress relieves stress.

Whatever the reasons for my fascination, Krav Maga and fighting quickly became addictions. But while my other addictions have weathered the COVID-19 storm without issue, the only one that actually means something to me has been largely sidelined. Fighting demands the kind of physical intimacy only fighters and lovers know, and this often with strangers, whose histories you aren't familiar with and whose assurances about proper social-distancing habits you have no reason to trust. Which makes fighting the worst possible hobby in a pandemic.

But it's also the best. Because the benefits of fighting go beyond romantic delusions about remedying historical catastrophes – they're cures for the anxiety brought on by them. Punch a bag enough times – punch another person, or, even better, get punched by them, even one time – and the stresses of the world drift away, ceding to more urgent anxieties that only appear when you give outlet to your aggression and put your body at risk.

Last year, one of my earliest fighting partners, Amy Winters, started her own gym with friends in a warehouse in South Austin, and since Krav Maga ATX reemerged out of lockdown a few months ago Winters has seen fighting's stress-alleviating power work magic on her pandemic-weary students. That exercise increases the production of endorphins in the brain is well-known to scientists, and hitting bags has been shown to reduce the muscle tension that can accumulate when you experience stress. But the additional emotional benefits of actually squaring off with another person and staring down ancient terrors are more mysterious. Just the idea that you can calm yourself down by being more aggressive sounds counterintuitive, even paradoxical.

"I know it's strange for people to hear, but fighting is meditative," Winters says. "When you're fighting you can't worry about anything else. You can't think about plagues and social unrest. You have to pay attention or you get punched in the face. It's a very active form of mindfulness."

All fighting styles offer this active mindfulness, but unlike boxing or Brazilian jiujitsu, Krav Maga was created with the stresses of the world in mind. Many of the exercises found in class are designed to simulate what students might go through in a street fight and accustom them to the flood of adrenaline and cortisol that swamp the brain and freeze the body in life-or-death situations.

"In 'stress drills,' we turn the lights out and the music up and try to create the chaotic feeling of a confrontation on the street," Winters says. "You may have to pull yourself out from under a group of people or try to escape as they're trying to hit you or kick you or choke you." Or, these days, instructors will just have students close their eyes and wait for an attack from a single dedicated quarantine partner. Such is the stress drill in the era of plague.

But no matter what concessions have to be made to COVID-19, the neurological paradox at the heart of fighting remains the same: Putting yourself under stress relieves stress. Which is why Krav Maga ATX and other Austin fighting gyms believe they need to be open now: Without the release of fighting, the anxiety of our malignant era would be too much to bear.

Looking for relief from his sorrow, the 19th century Romantic poet Lord Byron – a notorious aficionado of all physical diversions, including boxing – sparred on the morning of his mother's funeral.

A first fighting class can be a strange and exhausting experience, physically and emotionally. Winters says the best way to get over any initial awkwardness or fear is to pay close attention to the new movements you're introducing to your body, the way you would with a more peaceful practice like yoga. "Look at your hand hitting the pad and notice how it feels," she says. "If you're overwhelmed physically or psychologically or just embarrassed because you feel stupid compared to the other students, find the joy that comes from hitting something really hard."

A version of this article appeared in print on October 2, 2020 with the headline: Fighting Stress