The weird, life-changing story of the "Warm Bodies" producer 'Warm Bodies' producer Cori Stern: "I used every skill I had ever learned in dealing with the Backstreet Boys and Mariah Carey to get some medicine in to these kids" (Image courtesy of Lucklove Productions)

Like a lot of first time producers, Cori Stern was in a rush. Chatting with her a few days before the release of her debut feature, Warm Bodies, she said, "It's madness, as you can imagine." But it's not for the reason you might imagine.

Stern is a little like Conan O'Brien. She can't stop. Mere days before Warm Bodies debuted at number one with a $20 million opening weekend, she was working hard to get heart surgery for dozens of children in Africa who will die without it. As I wrote in last week's issue, Stern is also the producer of the Oscar-nominated short doc Open Heart, and she's working on a bigger documentary about international healthcare charity Partners In Health with Open Heart director Kief Davidson. It's all a long way away from her days as a producer at Fox Family. It's even further from her days scripting musicals like Goldie (a fish story) and Monsters! for Austin's kidsActing over a decade ago.

OK, so right about now, you're probably asking yourself: How does Stern balance an Oscar-nominated short, a big feature release, and making a documentary about what has become her life's passion? The day before we chatted, she was driving up the freeway from San Diego to Orange County. "I was on the phone with my manager and I was just like, 'I feel bad, I feel like I'm letting people down. If I'm focused on cardiac care, I'm letting down the larger social justice issue. If I focus on my zombie movie, I'm letting down the documentaries. If I'm focused on my documentaries, I'm letting down my Strongheart kids, which is another story. I'm always letting someone down if I'm helping someone else."

And then she saw a license plate on a van that said 'I <3 Valve'.

She pulls up next to the van, crying. "The guy looks at me, and he sees that I'm kind of freaking out, so he rolls down his window, and I roll down mine, and I'm like, 'I like your license plate.' He says, 'Thank you. I make heart valves.' What?"

Open Heart covers eight kids who travel from Rwanda to the Sudan to receive open heart surgery. That left another 52 kids – "In fact, more now," she said – on the Rwandan waiting list. "So I'm trying to put together a campaign called 52 Hearts, to use the attention on the film to get those kids surgery. It's very doable, put it requires an enormous amount of coordination between non-profits and surgeons and people who are working in Rwanda or working in Sudan or working in the USA."

Some documentary film makers worry about crossing the line between observing and assisting. Call it the Kevin Carter syndrome, after the war photographer lambasted for taking pictures rather than offering a helping hand. That's not an issue for Stern. Her documentaries are about getting things done, about creating real and achievable results, and if she wasn't making films to do it, she'd just be doing it herself.

Describing herself as a "freelancer attempting to be a force for good or change," Stern's been helping to evacuate critically ill and endangered children for years. "In fact, I've brought numerous kids from Africa to Austin, to Dell Children's Hospital for heart surgery, with this amazing organization called HeartGift. They started in Austin, but now they're in Austin, San Antonio, New Orleans. They bring children over and get them heart surgery, and they pay for everything."

Stern talks more like a campaigner than a documentarian, but for her there's no division. She said, "In the documentary film world now, you really have to show a specific, measurable impact. You have to have an impact campaign, you have to have impact goals, or else you can't really even get funded."

For her, that's a good thing and a bad thing. She said, "What kind of impact can you have with something like King of Kong? It's just an incredible well-made documentary, and you don't need an impact campaign for that. But it's harder for a film like that to get made these days because people ask, 'Well, where's your issue?'"

Stern actually has her own non-profit, the Austin-based Strongheart Fellowship Program. The idea is to take kids growing up in conditions of extraordinary hardship – warzones, starvation, genocide – and give them an opportunity to learn, mature and thrive outside of those hardships, and to potentially show others how to break the cycle that has wrecked so many areas of the world.

This was not what Stern planned when, in between TV jobs in 2002, she started looking for a rewarding charity gig. "I thought I would write press releases for the UN as a side volunteer job, and I ended up finding a group that needed help. They were caught behind rebel lines in Cote D'Ivoire during the first crisis there. It's a long, weird story, but I ended up using my producing skills to raise $100,000 through PayPal and coordinate a shipment of medicine into this group of a thousand orphans caught without food or medicine. I used every skill I had ever learned in dealing with the Backstreet Boys and Mariah Carey to get some medicine in to these kids."

For many people, that would be enough. But Stern suddenly realized that she had a reputation when it started preceding her. She said, "Someone emailed me and said, 'I heard about your work in Africa,' and I was like, 'My work in Africa? I've done this once,' and I hadn't even been to Africa at that point." The group that contacted her had a thousand spare doses of flu vaccine and were wondering if she could find a use for them overseas. "So I did some research and hooked up with a Nigerian doctor who ran an AIDS program who said it would be very helpful for the HIV patients was working with." She couldn't just ship it, because it had to be shipped cold, and she wasn't a known commercial cold shipper, so there was only one solution: "Go to a Kmart in Hollywood, buy a cooler, pack it in your own cold packs, and take it on an airplane. So that's what I did."

While in Nigeria, she found out about the plague of rheumatic heart disease when a young boy called Amiru came into the hospital in full cardiac arrest. Yet again, she found she was being asked for help. "The doctor finally cornered me and said, 'Can you help me?' Can I help? I can't do anything, but she's probably looking at me thinking, well, you got here with the vaccine, surely you're somebody." When Stern returned to America, she started looking for ways to get the boy valve replacement surgery. She said, "I had given him a little truck that I had found, and a box of toys that had been donated to the hospital. I felt lame, because I couldn't really help, and then he died, and I felt more lame. I felt like I didn't work hard enough, that if I had just made more phone calls, but the doctor was like, 'Y'know, I ain't got time for your pity. I've got a little girl that came in today, and she's got the same condition. Just keep going.'"

Tough as getting heart surgery may be for anyone in the US, Stern and the doctor had to jump through serious hoops to get a Nigerian girl into an American operating room. First the doctor FedEx'd a VHS of an echocardiogram of the girl's heart to Stern, who had copies made at a dubbing studio. Then she sent the tape to every cardiologist and heart charity she could. Finally Children's Medical Missions West got the Barbara Bush Children's Hospital in Maine to agree to do the surgery for free, so Stern and her friends raised the money to fly the girl to the US. "I got her a visa, which is a totally crazy different story, and she came clomping off the plane at JFK in gold lame granny shoes from the sixties that were three sizes too big, but the whole village had chipped in to buy for her. She had a little bag, no checked luggage, a kerchief wrapped around her face and didn't speak a word of English."

But it would be impossible to treat every African child with rheumatic heart disease in the US, so since then Stern has been working with African-based health charities. That's how Open Heart came about, and she's still working with charities. Oh, and her big untitled Partners in Health documentary still in production. "We started filming three weeks ago this week in Haiti, in the aftermath of the earthquake," she said.

If there's a lesson from Stern, it's pretty simple. That changing lives like this doesn't take much more than ingenuity, determination, and using what skills you have. "There's a world to help out there," she said, "you just have to be willing to connect the dots." 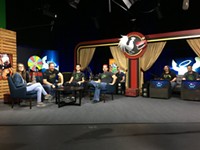