How the documentarian turned true crime tropes on their heads

Some documentarians find their next film through hours of painstaking research. When Bart Layton stumbled across the amazing true story behind American Animals, it was a much simpler path. "I read about it in a magazine." 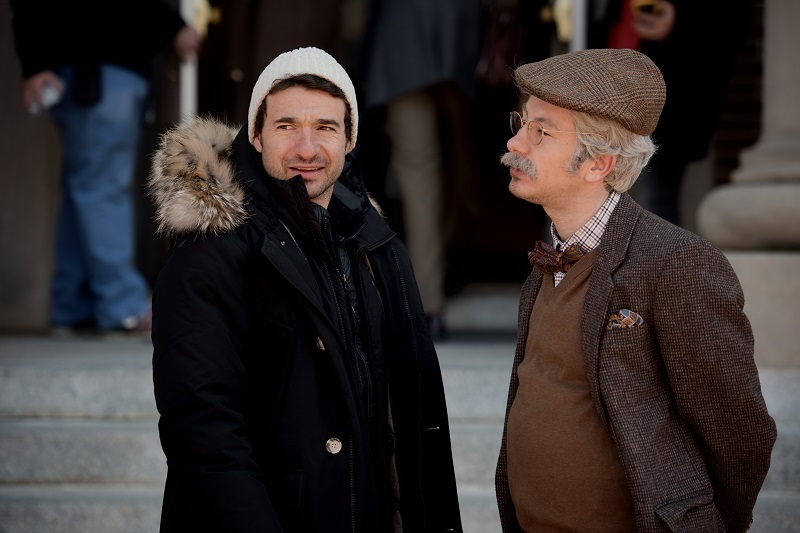 OK, there's a little more to it than that. Like anyone with a background in documentaries, he said, "You're always looking for stranger-than-fiction stories, and that was one that was completely bananas."

That magazine article was about Kentucky's famous Transy Art Heist: in 2004, a gang of fearless art thieves executed a perfect snatch-and-grab of over $5 million in rare books, including Transylvania University's copy of John James Audubon’s seminal natural history study, Birds of America. Only they weren't fearless art thieves. They were four students, dressed as old men, who carried out the crime but bungled everything else.

Initially, Layton wasn't sure that there was much more to it than "a fun caper story, but the more I read about it, the more I got in to researching it, the more bizarre it became, not least because the prepetrators are so unusual. They were well educated young men from good families with plenty of opportunities."

Layton cast four rising stars as the real-life crooks: Burnout jock Warren Lipka (Evan Peters), future entrepreneur Chas Allen (Blake Jenner), art school kid Spencer Reinhard (Barry Keoghan), and, most unlikely of all, aspiring FBI agent Eric Borsuk (Jared Abrahamson). However, his twist was to cast the real Lipka, Allen, Reinhard, and Borsuk as themselves, playing Greek chorus on the truth (or otherwise) of what was being shown on-screen, and what each other claimed happen. When he first reached out to them, he said, "I was so struck by the honesty in their letters, and I was so surprised by what they said was their motivation, I realized that it was a lot more than a great story of a caper. It was about these rather lost young men about searching in all the wrong places for an identity, and a life experience that would give them something defining."

Austin Chronicle: What was your experience like of first meeting them? Particularly Warren, who feels like he fell out of a film anyway. There's always something very performative about him.

Bart Layton: Warren is Warren. He's someone that doesn't see limitations the way that most of us do. There's a line from Spencer that I didn't put in the film, that rules are just really not for him. He is this larger than life person who is constantly pushing at the boundaries, and at the same time he is very charismatic, very magnetic. You feel like, if you spend too much time with him, you're going to end up getting in some kind of trouble. But he's also someone that lives in quite big extremes. Just as he feels joy in a effervescent way, but he also feels remorse in a profound level. He's living at a high velocity. Eric said he couldn't believe that Warren's still alive, because he has this weasel-like ability to get in and out of trouble.

“They have spent so much time planning the robbery that they realize, you know, we probably could do this, and we probably could get away with it. Then the need to know what happens on the other side of that line becomes all-consuming.”
Warren is one of those people that we all have, where we're not like that generally. For Spencer, who is desperately searching for an adventure. He's the ying to Spencer's yang - that's something Spencer's dad said - and they rely on each other. In a way, I was very conscious that there's a love story at the heart of this. The thing that links all the guys together is that they're all in Warren's orbit. They're all slightly all in love with him because of that thing of him being somehow liberated from the limitations that most of us aren't.

I found them all interesting in different ways. I found Spencer to be quite introverted and thoughtful, and I don't think he ever imagined they would ever go through with it. But partly because he didn't want to miss out on being in the spotlight of Warren's attention, that's what kept them going when they should have stopped much earlier.

AC: You've dealt with wild documentary stories and wild story structures before in The Imposter. What made you go, one, this has to be a narrative story and two, to subvert the idea of a documentary with re-enactments, and make this a narrative with a real-life commentary?

BL: The starting point is always, what is the best way to tell this particular story? And when I say the best way, I mean what is the most emotionally engaging way for the audience to come to a story, and I think there was just something about a group of young men who choose to inhabit a movie fantasy, as opposed to what they saw as their own rather mundane lives. It felt like it required a film grammar that could somehow reflect that, that as they descend into the fantasy, the audience descends deeper into movie world with them, and we get lost in the movie, and more and more detached from reality. But all the while remembering it's a true story. The people are real, the consequences are real.

We all watch movies that start with 'based on a true story,' and then you have a sneaking suspicion that everything that follows is a wild exaggeration, and probably masses of artistic license have been taken. For this, I didn't feel the need to take huge re-inventions, and exgagerate the whole thing. It felt like it was an extraordinary enough story without the need to fictionalize it.

"He didn't want to miss out on being in the spotlight of Warren's attention, that's what kept them going when they should have stopped much earlier." Writer/director Bart Layton on the dynamic between Spencer [Barry Keoghan] and Warren [Evan Peters] in American Animals.

The other thing was the inclusion of the real guys makes your emotional connection to the story much greater. Despite the fact that they're doing a terrible thing, and despite the fact that they're morally confused, I think kind of fall into the story, and you can relate to their desire to play Russian Roulette with their existence, and find something that's going to give them this experience that makes them feel like they're alive, that they're going to shake everything up. They have spent so much time planning the robbery that they realize, you know, we probably could do this, and we probably could get away with it. Then the need to know what happens on the other side of that line becomes all-consuming.

AC: People are very bad at risk assessment. They're terrified of getting on a plane, but they'll get in car every day. But people also don't realize that they could get away with a lot more than they think, and they all have that moment of realization. You definitely play with the question of who's idea it was, and who needed convincing, and they often disagree. Those are the moments when the Greek chorus is not in harmony.

BL: The intention was to find a new way of telling a true story that we haven't quite seen before. In doing so you're drawn into the film, but we're also pulling back the curtain a little bit on the way in which stories get fictionalized. You're invited to question, not only the fact that we have these unreliable narrators, but memory itself is pretty unreliable. I wanted to bring the audience into the process a little bit more, because we've all seen those movies like Molly's Game. Did she really look like that? Did she really sound like that? With this, why can't we have our cake and eat it?

It's the difference between watching a movie with a bunch of characters you don't relate to, and participating in it against your better judgment. So when you do come to these heartpounding moments, you experience them much more deeply, because you haven't gone into movie world where you're encouraged to suspend disbelief. You're still stuck in the same world where you and I live in, where people shouldn't do this stuff.

Demagoguery Disguised as Documentary
What is the difference between Dinesh D'Souza and Michael Moore?