Food Issue Extra Helpings: My Relationship as a Google Doc 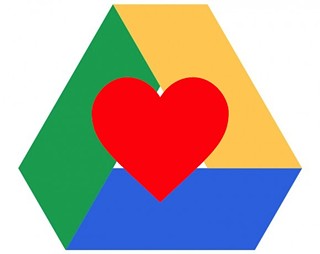 As the lights went down at the Alamo Drafthouse during my first date with my now-boyfriend, my mind was running a mile a minute.

We'd just come from dinner at Old School Bar & Grill; he'd told me he was on a quest to find all the best burgers in town, and I insisted he try theirs. Over the course of our meal – with barbecue sauce everywhere and grilled onions for both, because we have no healthy concept of date food – we'd chatted about approximately 19 billion things, from foods and families to jobs and travel. But when we sat down in the silence of a movie theatre, all the tangents and threads kept moving.

Had he seen that other movie like this one that came out in 2007 that I watched last summer? Oh man, he just ordered an IPA; has anyone introduced him to the other Draught House? Gah! That video I'd just seen with the herd of St. Bernards in a field! He totally needed to see that.

The viral videos and movies were par for the course: We'd established our unhealthy obsession with the Ocean's trilogy early on, and what twentysomethings don't pass links back and forth on Facebook walls to gauge one another's sense of humor? But food … Oh, food. This I had the upper hand on.

I'd moved to Austin in 2005 and promptly made friends with a group of locals who showed me How It's Done around here. He'd arrived just six months prior, and boy did he have some catching up to do.

So there at my seat in the Drafthouse, I did the only thing I could: I snagged an order card from the bar and started writing what I was positive were legible notes on all the things I hoped he wouldn't think I was crazy for sharing as we walked back to the car.

Despite my notes looking like nothing shy of a ransom note, he didn't. In fact, he kinda liked the idea.

As the weeks went on and I continued remembering important tidbits at the worst possible moments, I took to scrawling them on whatever was nearby – sticky notes, bathroom mirrors, whatever – until, bless his heart, he finally accumulated them into a Google Doc affectionately known as The List.

(The irony is not lost on me that Doc and OCD are anagrams for each other. Don't judge; it works.)

We started small, with a few little categories for things to watch and things to eat, but that quickly got out of hand. Now, almost two years later, we're still adding to The List on a regular basis, working through our ever-growing compendium of the best of Austin dining. The food section eventually grew to have its own subsections based on area of town, suggested meals, and price; after a while, we started moving the completed items to another page altogether for revisit consideration. As of this writing, we've got two and a half pages' worth of places we need to visit, another half page of things we want to cook together, and almost three pages of "done" places that we want to go back to. "Where do you want to eat?" I'll ask. "Let's go to The List," he says.

We've had a pretty ridiculous amount of success with this system, with only one outright dud to date. But my favorite section of The List? That's the Fancy category, where we tuck the Quis and Mettles and Uchis of the world. They might be out of reach for your average Tuesday, but for special occasions – like, say, his birthday, mine, and Christmas, respectively – we give each other the gift of food and cross one of those pipe-dream dinners off The List.

So as we approach this coming week, which includes both our second anniversary and Valentine's Day, we found ourselves staring at that little organized all-star team with one of the best possible decisions to make: Where to? And this time, the answer was easy: Olivia for Valentine's, and the all-too-appropriately named Second Bar + Kitchen for our anniversary.

Now, could someone go ahead and get to work on opening a Third for next year? We'll add it to The List.

What the Hell Is Google Fiber, Anyway?
A quick primer on the service everyone's talking about