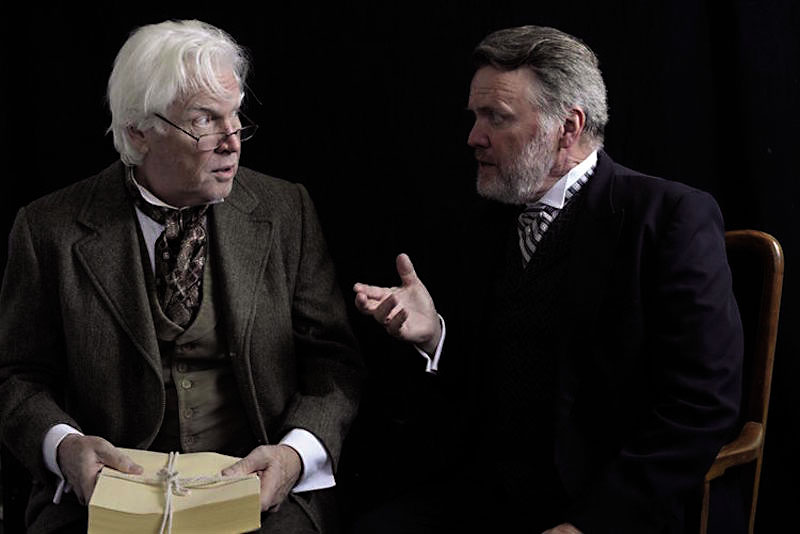 Henrik Ibsen's play John Gabriel Borkman might best be described as a story of massive selfishness. All of the characters see only as far as their own ambitions, and each pays the price. Different Stages' production makes every downfall as clear as the cold, biting air of its winter setting.

John Gabriel Borkman (Ev Lunning Jr.) has been a prisoner for years. He was a prisoner of the law for five years due to his mishandling of funds in a reckless gamble when he was chairman of a bank, and since then he's been isolated by his wife Gunhild (Jan Phillips), who lost her reputation in society when he was convicted.

It emerges that Borkman's crimes reach back even further. He was romantically involved with Gunhild's twin sister Ella (Katherine Schroeder) before betraying her in a business deal, sentencing himself to a life with a wife who never loved him. Their adult son Erhart (Sebastian Garcia) represents for all three the chance for redemption – but it wouldn't be an Ibsen play if Erhart were content to go along with their wishes.

In its highlights, the story may veer in the direction of soap operas to a modern audience. The depth, however, lies in the characters and the exquisite balance achieved between their competing desires. Abstractly, each represents a desire: Borkman for money, Gunhild for reputation, Ella for love, and Erhart for individual happiness. Even Foldal (Garry Peters, in a lovely performance), a clerk who lost all his money in Borkman's scheme, loses sight of his family's interest out of a need to feed his own misplaced artistic vanity.

Much of Ibsen's work concerns itself with the cost of individualism to the greater community. The game of chess played out among the characters of John Gabriel Borkman might be seen as a demonstration of the downfall that results from an inability to let go of personal desires.

The cast rightly focus on the interplay between characters. Their well-paced delivery shows a depth of understanding of a story full of complex exchanges. Norman Blumensaadt's direction of the action, though strong in the execution of the dialogue, is at times static and misses opportunities to emphasize the theatrical. Several times, for example, it's emphasized that the story takes place in the deep winter in Denmark, but nobody seems to shiver much, even when outside in the storm.

The pleasure of seeing this production of John Gabriel Borkman is the opportunity to relish in complex exchanges, with a cast who commit themselves deeply to the parts. It should also be said that there is a unique pleasure in seeing a story filled with individuals later in life, with vibrant stories of their own. The show is a thoughtful evening of theatre, with a satisfying, if sad, conclusion.