This world premiere from a brand-new company lacks polish, but it does honor its community’s stories 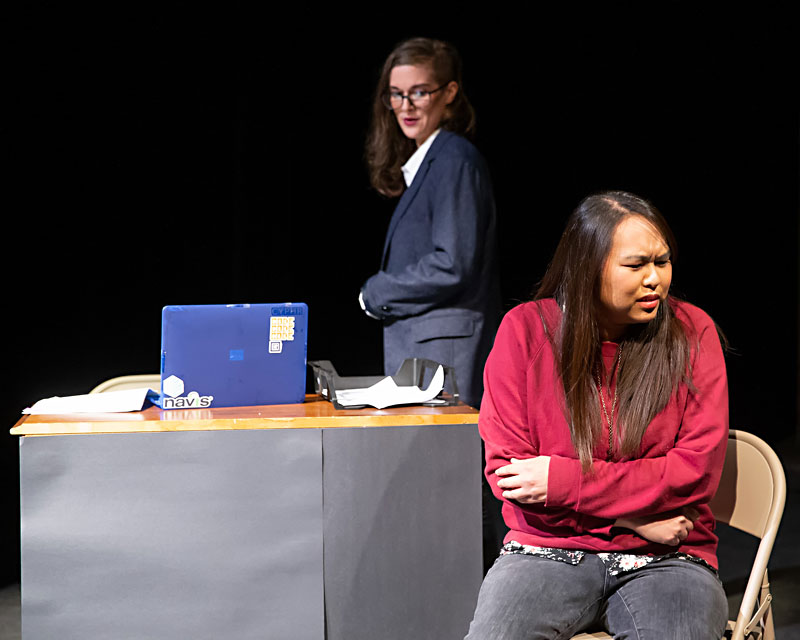 This review is a letter from the past, when it seemed like going to the theatre on opening night during a pandemic wasn't a bad idea. It is entirely possible that by the time you are reading this, it will look like either colossal stupidity or sound, rational thinking. Right now, that's anybody's guess.

On opening night of Sad Girls Productions' So Lucky, Ground Floor Theatre cut house sizes in half and blocked off every other seat to provide social distancing. But they chose to move ahead with their show in uncertain times. So Lucky is a play about Pen (Sandy Lam, who also wrote, produced, and co-directed the show), a young Asian American woman who wants to organize the first Lunar New Year celebration her town has seen. To do so, she'll need to overcome community skepticism, apathy from her fellow Asian Americans, and lasting issues with her overbearing and difficult mother, a first-generation immigrant from China by way of Vietnam.

Lam and her large company (almost 20 actors in the curtain call) have mounted an enormous effort. The company's artistic inexperience means the production lacks the polish that most of Austin's stalwart semi-pro companies can boast. The actors are still learning fundamentals like projection and physicality. The direction lacks focus, and the design made for drawn-out, arduous scene changes in the dark.

One could go on, but that would just be raking a group of young, inexperienced artists over the coals. It's worth pointing out the nuggets of potential in Lam's story, the bits where the show's potential rises to the surface. The legend behind the Lunar New Year serves as a lovely frame. An early scene shows thoughtful discussion of different second-generation experiences. There are bursts of acute and effective imagery, like when Pen recounts how her mother (Casie Luong) made her literally shrink into less space.

The mother's a tricky character. In one scene, Pen scolds two Asian American guys (David Woo and Marc Cornejo) for telling jokes about overbearing Asian moms who are always telling their kids to study, calling it problematic. Yet much of Pen's struggles begin with her relationship with her overbearing Asian mom who always tells her to study. Other Asian American artists have remarked in recent years on their frustration with seeing Asian parents always depicted as culturally unaware, one-dimensional taskmasters. Even stories that have been told many times before can still hold value, but the mother character here doesn't get enough of her own truth to exist far beyond the stereotype. She doesn't even have a name. (Check out Fonda Lee's The Green Bone Saga or Ali Wong's comedy for some very different takes on Asian and Asian American families.) Without showing an earnest conflict of values or transformation of character, their eventual reconciliation lacks weight.

Taking a step back, it's useful to see the ­production­­ itself in the same way as we do Pen's attempts to mount a Lunar New Year celebration. It's an effort to honor a community's stories and all the conflicts those include. Remem­ber that, as in the legend, when a community raises their lights, it can hold meaning in a way that sustains and strengthens us in the face of adversity. So Lucky is raising its own light in uncertain times.