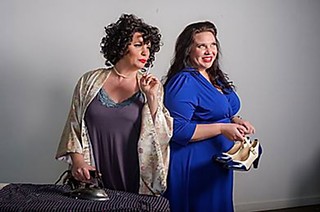 Even as Apollo 11 was heading for the moon, not everyone on Earth was of the mind that this was a good idea. Geraldine says as much to other members of her family while they talk excitedly about the first day of the mission. As far as Geraldine's concerned, mucking about in outer space is just asking for trouble.

Her comment flies in the face of the prevailing mood in her house, not to mention around the world, but the more we see of Geraldine in Gliders, a new drama by Austin playwright Rita Anderson produced by Different Stages, the more we realize she isn't really a science person at all. She puts her trust in astrology, not astronomy. And in numerology. And in palm reading. And fortune cookies and visions and Padre Pio, the stigmata-bearing Catholic mystic who died the year before but is still answering prayers. Geraldine's belief system belongs to a different time, a time before satellites, psychedelics, free love, equal rights, and such were upending the social order, changing the way things are supposed to be.

At this pivotal moment in human history, this "giant leap for mankind," when so much of society is looking forward, Geraldine is looking back. If this were just about choosing mysticism over the moon shot, it would be one thing, but we discover that Geraldine is also regressive about what a woman is meant to be and do, an attitude that turns out to have grave consequences – dangerous ones, even – for her and for her 13-year-old daughter. When Geraldine ascribes bruises to a "fall down the stairs," the disapproving looks of sister Deborah – a forthright, ultimately courageous Ashleigh Pedersen – tell a different story: This is the work of Geraldine's husband, Eddie, and we can tell this isn't a new problem. As Geraldine, Andreá Smith listens to Deborah's reproachfulness with the downcast eyes of someone hearing a painful truth, but then Smith lifts her head, and her eyes shift to a forced hopefulness as she spouts optimistic bromides about change. We see a willful blindness in Geraldine, who won't leave her abuser because what is a woman without a man?

In this, Geraldine is her mother's daughter. Mother Madge is ever present in the play, at first about to be feted on her 60th birthday – a milestone she'd rather ignore – then in flashbacks to the Fifties and Forties. In every scene, Kate Meehan's Madge is the same: boozy and bawdy, a brash broad on the prowl for a man ... because what else is there? Madge's died when Deborah was still a baby, and she's been hunting for a replacement ever since. Which left Geraldine imprinted with the fear of losing hers.

Meanwhile, 13-year-old Dawn is crossing the threshold into womanhood and suddenly acting out. To Mom, it's mostly insisting she be called Leslie, but to cousin Christine – also 13 but still clinging to childhood – it's a whole crop of teen forbidden fruit: drinking, smoking, stealing, kissing, porn. Melissa Vogt and Frances Bello, both adults, face a special challenge playing youth, but they capture the mercurial push-and-pull of adolescence, sometimes acting like mature grown-ups, sometimes still being petulant kids. The tension between them as Vogt's Dawn/Leslie plays temptress and Bello's Christine resists is evidence of Karen Jambon's skillful hand at directing. These characters all interact with familial familiarity. Vogt's Dawn/Leslie also projects that distinctive teen rush of rebellion, of playing with fire and being unaware how close she is to burning up. Her blindness may not be as willful as her mom's, but we learn it carries just as much risk.

And risk is something all of the women in Gliders must confront. Cling to past attitudes, as Geraldine does, and you risk life with a monster of a man, who will keep abusing you and, even more horribly, others you love. Or follow the example of Aldrin, Armstrong, and Collins, who risked their lives in the black void of space to move all of humanity forward. Take the risk of saying no to what you know is wrong, of walking out the door, of getting an education, of making your own way. Deborah's husband Curtis says, "Anything's possible." It's one small step ... 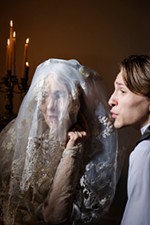 Different Stages' Great Expectations
In this retelling of the Charles Dickens novel, a visible love of narrative is the show's greatest strength