After 18 years, Zach has remounted this mix of Greek tragedy and gospel, and miracles abound


The old man's coming was foretold by the preacher, so we are ready when he hobbles into view behind the choir, a cane in his hands to guide his steps, dark glasses masking the empty eyes torn out by his own hand, a suit the color of blood to mark his sins. The mighty frame of his prime, when he solved the riddle and saved a nation, is bent and looks hollowed by the years, like an aged oak. And yet when he opens his mouth to challenge those who would keep him from resting on sacred ground, his voice is as clear and pure as a running stream, as mighty as a wind that sweeps across the land.

That is one of the miracles of The Gospel at Colonus in its revival at Zach Theatre. When this musical was first staged there 18 years ago, Tim Curry portrayed Oedipus – yes, the old man is that thrice-cursed king, "damned in his birth, in his marriage damned, damned by the blood he shed with his own hand." Now Curry is reprising the role, but while time's effects may be evident on his body, his spirit is undimmed and that majestic voice can still rattle the gates of heaven. Indeed, having heard a recording of the 1996 show recently, Curry sounds even more thunderous and clear today, if that's possible. And he isn't alone. He's joined by several colleagues from that earlier staging – Janis Stinson, Judy Arnold, Jacqui Cross, Felicia Dinwiddie, Roderick Sanford, Kenny Williams – and all bring to this work the same celestial harmony, the same incantatory power, the same jubilation, the same glory, that they did some two decades ago. When they lift their voices in service to Oedipus' story, to sing his message of release from this vale of tears, of redemption from sorrows unspeakable, we cannot hear age in them; they're as timeless as a choir of angels.

And that is another miracle of this show: the unlikely marriage of ancient Greek tragedy and gospel music of the contemporary African-American church. As handled by Bob Telson and Lee Breuer, this unlikely match proves inspired; they treat Oedipus' tale as if it were that of an Old Testament prophet – and it sounds like one: the fallen king who has wandered the land for years, sightless but repentant, in his final days coming to Colonus, the spot prophesied as his resting place, and being finally forgiven by divine power and granted peace. The themes of earthly travails and heavenly redemption align beautifully with those of gospel, and Telson's music and Breuer's lyrics possess that music's glorious uplift of the spirit – you feel carried into the firmament on it, especially when all the singers – including the 20-voice choir, led rousingly by Brian L. Ridley – join together. The service in which this holy lesson is communicated – which is presided over by Eugene Lee with the compelling authority of one channeling the Almighty – will charge your soul.

Zach Artistic Director Dave Steakley has been waiting a long time to bring this service back to his congregation, and with good cause: The Gospel at Colonus is a powerful work, one that invites us to witness and rejoice in redemption. Certain changes that he's made in this remounting – moving the service setting from indoor sanctuary to revival tent, adding praise dancers and trapdoor effects – expand the show's spectacle but don't always enhance its message. That lies simply in its text and music and the voices that deliver them, and he's given us all that again, in marvelous abundance. Good news, indeed. Amen! 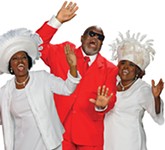 'The Gospel at Colonus'
After 17 years, Zach Theatre revives this spirited mix of soulful music and Greek tragedy