Valoneecia Tolbert Geeks Out in Tales of a Blerd Ballerina

The actress looks back at what it was to be young, geeky, and Black 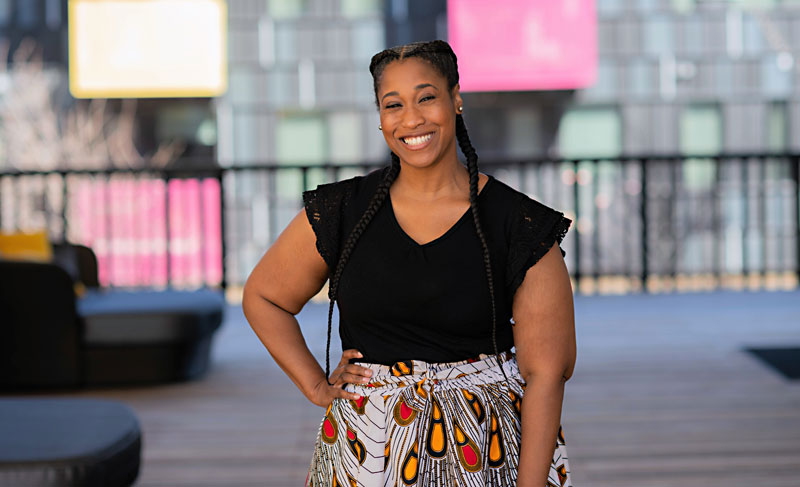 That Valoneecia Tolbert includes the term in the title of her new autobiographical solo show, Tales of a Blerd Ballerina, tells you where she's coming from. However, the actress points out, "In the Eighties and Nineties, when I was growing up here in Austin, there really wasn't an identifier for what I 'was.'" She was a girl who loved spending Saturday mornings watching Planet of the Apes cartoons and The Wild Wild West with her Grandma Valetta. That wasn't an issue when she was young – "I was very fortunate that I grew up in a household that just allowed me to be," she says – but as Tolbert got older, things changed. "Little Black girls listening to Poison and being into comic books was not looked at as normal. I was that kid: too white for the Black kids and too Black for the white kids." Terms like "weird" and "nerd" were thrown at her, defining her, hemming her in. "I was always around people," she says, "but I felt very isolated."

Tolbert "just wanted to belong," and at Texas State University, she finally got her chance. "College was such a personal growth time for me," she says. "I didn't feel confined. I had two people in my life that I could really be myself around and [who] showed me there were a lot of people out there who loved sci-fi and cartoon work and weren't shy about being adults who could tell you all the subplots and context of an Inuyasha episode without shame. It was a beautiful time."

Since then, Tolbert has devoted most of her theatrical energies to performing other peoples' stories – Lisa B. Thompson's Single Black Female and The Mamalogues, Reina Hardy's The Afterparty, Shakespeare's Henry IV and As You Like It – but the story of her own Blerdhood is one that, she says, "I wanted to tell for a while – even when I didn't fully realize how to do it." She describes it as "a yearning – some would say need – to have a Black narrative that isn't rooted in Black brutalization or sorrow, wanting to see my reflection in the mirror of the art I create and a desire for joy to be at the root of my Black narrative. There have to be more positive narratives for young Black women that show our love for each other. There is dignity and beauty in just being you."

So Tolbert has spent the past year developing Tales of a Blerd Ballerina, a choreopoem that relates stories of her Eighties childhood in all its love of nerd culture with humor, music, and dance. With support from a cohort of local theatre makers under the umbrella Performance Platform Austin and the National New Play Network's Bridge Program, Tolbert is presenting a workshop production of the play at the Vortex. In a sign of theatre's gradual comeback, Tolbert will perform live to a limited audience in distanced seats inside the Vortex. (Masks required, temperatures checked before the show.) Each performance will also be livestreamed.

After all this time thinking about and working on the show, Tolbert considers this opportunity to tell her story "a terrifying blessing. In a lot of ways I am a private person, so being this emotionally naked so publicly is new. There's no character to hide in. It is just you."

And "you" are a Blerd ballerina. So why choose that term?

"Black. Nerd. Dancer. It seems we always have titles or labels that we do not always have control over," Tolbert replies. "It seems like the only way people feel comfortable with how we exist with each other. That's a shame because the labels can be very confining. In this instance, it's freeing to choose your own identity of past and present. Do these explain everything about me? No. But Blerd Ballerina is a start."

Tales of a Blerd Ballerina

A version of this article appeared in print on April 9, 2021 with the headline: Young Blerd