Photographer Bobby Scheidemann's Tumblr "Road Tolls" is an aggregate of hundreds (if not thousands) of closely cropped photos of Austin drivers stuck in I-35 traffic. Most of the drivers that Scheidemann's camera captures are blithely unaware of the fact that they are sitting for the artist, and so we see the stress and boredom of traffic registering on their faces; many look at cell phones. "Only one person has flipped me off," Scheidemann says almost incredulously. Having recently moved to Austin after stints in Chicago and New York, Scheidemann has taken up residence in a cozy house near Zavala Elementary School on Austin's Eastside. His room that he rents, also his studio, is plastered with large black-and-white photographs – some of which are details from his Road Tolls project.

Austin Chronicle: So I had to rush over here because you're about to pack up your studio tomorrow in preparation for SXSW.

Bobby Scheidemann: Yeah, all the rooms are being rented out.

AC: What's it like to have to move your room/studio? Do you leave the photographs up on the wall?

BS: I'm used to uprooting. Everything I'm doing now as an artist is based around mobility, I believe. I'm excited about SXSW forcing me out – relatively speaking, we'll still have the living room and bus to crash in. I'm taking it as an opportunity to do these closely studied portraits of people I know.

AC: For such a small space, you've got a lot of work up!

BS: I tend to work on a lot of projects at once – right now I'm working on three different projects. Making is my form of thinking. The biggest project I've been working on is called "This Road Has Tolls," and it deals with the hot topic of I-35.

AC: You've hit upon I-35 as a topic in your first year in Austin. How did that happen?

BS: Well, strangely, the deep space Hubble photographs inspired this project. Scientists pointed the Hubble at a "dark" area of the universe, expecting to find nothing and instead found millions of galaxies. Similarly, I walk along I-35 during rush hour and document it in a performative way. No one walks I-35. And I've found a lot.

AC: The size of your photographs is striking. Why print this big?

BS: Well, the photographs are 2 by 3 feet, and Staples is basically my print center. I go there and print these giant black-and-white photos for $3 each.

AC: At the risk of giving everything away, how did you get turned on to Staples?

BS: When I got to Austin, I wanted to find some resources for printing photos, and through search engines I found this home ec. blog written by a mother discussing the most economical way of making large family portraits. They're called engineer prints, and they're basically blueprints. They're cheap and fast, and I've found nothing better.

AC: Are you recognized at Staples now? I'm sure most people aren't using the service for what you're using it for.

To see more photos from our visit with Bobby Scheidemann, go to austinchronicle.com/photos. 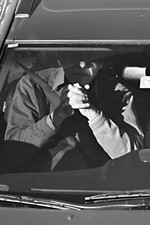 "Bobby Scheidemann: Together at Sunset"
Scheidemann's rush-hour portraits of people in cars reveal the character of both individuals and highway