"Bobby Scheidemann: Together at Sunset"


A tidy row of unframed, low-cost, large-scale engineering prints hung by bull clips trace the perimeter of ATM Gallery, the bulk of which bear candid black-and-white portraits of unknowing subjects in their cars. What began as a photographic project focused on the highway and local traffic as points of congregation instead reveals itself as a study in humanity and our shared pressures. The highway quickly dissolves into an allegory for the machinelike systems we as a society have created and the incongruence these systems can have with our very un-machinelike pursuits of happiness and betterment.

What at some point inevitably strikes the viewer in these through-the-windshield voyeurisms is a deep sense of loneliness despite the reality of the subjects being separated from those around them by only a few feet of asphalt. That emotional tone becomes more complex as each portrait describes unique but interlocked facets of individual struggle and routine exasperation – this despite the commendable variety of portrait subjects across demographics of age, race, and, in one instance, even species. In that way, Scheidemann sets up a compelling contradiction: a slice of the population all in one place at one time, each individual feeling alone and focused on his or her own struggles yet, unknowingly, all psychically singing in complex harmony that same song of solitude, the song of humanity in the grips of the machine. Scheidemann shows that we are together, if only in our un-togetherness.

But that's just one of many postulates presented by the exhibition, and as the prints themselves suggest, the journey can bear much more emotional interest than the journey's conclusions. Undoubtedly, part of the success of the work comes from the artist's systematic methodology, which is half-built on a machinelike intensity and half-built on intuitive sensitivities. Like a human toll camera, Scheidemann situated himself on a local overpass to collect thousands of images of the individuals in the passing cars below. Focused completely on timing in order to catch the vehicles in the opportune moment, Scheidemann was only able to see and analyze the images some time after the images were taken. Because of this, he wound up seeing the works as a viewer of the exhibition might see them, with fresh eyes and a sense of discovery. The same nervous chuckle from the viewer was first uttered by Scheidemann when he discovered what at first clearly reads as a skeleton strapped into a passenger seat, an unlikely memento mori among the portraits of the living. The artist shares in the viewer's surprise in finding a passenger taking her own photograph right back with her smartphone, or in the mariachi smoking a cigarette slouched over the driving wheel, or in the despondent canine somehow expressing the same furrowed brow as the human subjects, as though she too was just coming home from a 12-hour shift. 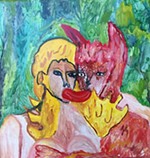 “Jos Howard Demme: Bad Boys, Good Dogs, Everyone Else in Between”
This solo show at ATM Gallery / Studio is both romp and nightmare – Dante's Inferno dressed up like a clown 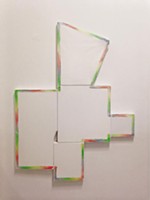 "Unconscious Collective"
John Tennison's solo show lacks an editorial eye, and the exhibition suffers for it