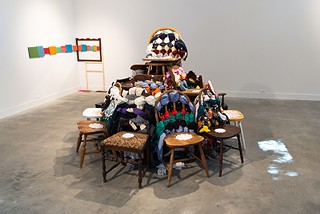 
How to sum up this show? Sexual dimorphism meets Colonial Revival design – oh, and there's lace, raw construction, other people's laundry, pilfered library books, exquisite screenprints on glass, and quirky patterned drawings, to boot (just in case mixing your grandparents' furniture with sexual politics isn't really your thing). This solo show is very dense, full of ambitious work and all conceptually weighty. Michael Anthony García has been a busy man, and it shows here.

There are two aspects that define duality, a somewhat tired term that's thrown around a lot in artist statements and exhibition texts: The one that's usually explored in duality art is the polar aspect (light and dark, movement and stillness, puritanism and hedonism, etc.); the one explored less often is duality's underlying unifying quality, the sense that these polarities exist in tandem in an individual, culture, object, or image. By focusing on this second aspect, García convinces the viewer that unified polarity is not a contradiction – that duality is not just some literary device, but an accurate nonparadoxical truth. There couldn't have been a better title for the show: chimaera – a single organism formed from multiple distinct genetic material.

The duality most apparent here is gender. Raw pine construction and pre-IKEA mass-produced furniture (bulky faux carved-legged coffee tables, ladder-back chairs, pressed-wood nightstands) make up the masculine side, while lace, doilies, cloth, and light itself make up the feminine. The gendering of the materials can almost be ignored, which is good, because duality is not the only story this exhibition has to tell (but the only one we have space for here). This said, García has placed just enough elements that keep drawing you back to that theme – the book Sexual Personae on the nightstand, for example, or sculptures such as Hyperbolic Male, a helix of neckties that simultaneously references DNA, classical phallus sculpture, and male exaggeration (in business and in ... other business).

Cocksure (speaking of titles) is a large ziggurat of stacked chairs collected from friends and family, each with a distinct personality and clear signs of use, and woven together with clothing from the same sources. The total effect is of a unified whole rather than separate parts and serves as a representation of the individual and of a social group – internal elements lending mutual support building to something greater, but also causing a sense of binding or restriction. It's this centerpiece of García's show that breaks open the binary of dualism into a multidimensional chain of influences, each as diverse as the pieces of furniture which make up a home, as different as the individuals who have owned these things and imprinted their personality onto them. As multifaceted as the exhibition is, this remains at its core: the synthesis behind single entities, whether that be a sculpture, a persona, or a social unit. 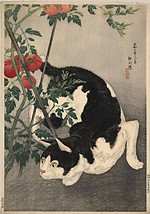