When you hear about a local festival expanding – and what local festival isn't, in our current happening-happy climate? – it's only natural to wonder how many more bands/acts/films/punch line peddlers will get crammed into the schedule as a result. I mean, it's a mathematical given that fest growth = more things to watch, right? 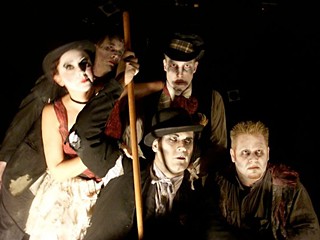 Not always – at least not with the Out of Bounds Comedy Festival, which opens its 12th year of tomfoolery Tuesday, Aug. 27. A scan of the 2013 schedule reveals the same number of nights (seven) as the last few years and approximately the same number of shows (120) and performers (500). But wait – they're spread across eight venues instead of the usual six, and, in addition to the regular cozy homes to improv, sketch, and stand-up (the Hideout, The New Movement, Coldtowne, the Institution, and the Velveeta Room), there are a couple of spaces that are significantly larger than the 50-to-75-seat mainstays. OOB commander-in-chief Jeremy Sweetlamb not only confirms that to be the case, but he adds that in this instance, growth equals not more things to watch but more people watching.

"The last couple years we have expanded more in available seats for audience, so having shows in larger venues with more frequency. For instance, this year we are in the Rollins Studio Theatre at the Long Center, and we're at the Stateside at the Paramount for five nights. We've never tried to pull that off before. We've also given more repeat shows to groups with a ton of performing power. So, a group that scored well in our submissions scoring might get two shows instead of just one. That keeps the number of groups down even though we are slowly expanding. We are also adding another night to our stand-up offerings, now running Wednesday through Sunday. Every year we add a night to stand-up, and it always works out great."

Sweetlamb is well aware that most of the acts he books for Out of Bounds don't enjoy the name recognition of even the indie-est bands at ACL or the cablecast stand-ups in the Moontower Comedy Festival. So one way he's worked to draw in audiences is with programming that might catch the eye of anyone, no matter how unfamiliar they are with the comedy scene – say, pulling in a local celebrity for an event, as with video game entrepreneur/astronaut Richard Garriott in this year's OOB edition of the improv show Stool Pigeon and Alamo Drafthouse major-domo Tim League for the annual comedy roast; putting an improv spin on a timely pop-culture phenomenon, as with "ZEDtalks," an improvised spoof on the ubiquitous TEDtalks; or (speaking of ubiquity), booking a few comedy podcasts.

"We pay attention to trends in live performance and try to incorporate those into our offerings," says Sweetlamb. "So, with comedy podcasts doing very well and reviving careers, we thought it would be an easy way to get our name in front of thousands of international listeners and give Austin audiences a peek into how these nuggets of radio get produced. In reference to some of the other more interesting and strange ideas I've come up with like 'ZEDtalks,' improvised stand-up, and the roast, these are not new ideas, while being new to the Austin scene, but they are ways to diversify the programming. So when someone looks at the schedule, they're not just seeing 70 troupes from out of town for whom they have no reference point. If they see we are roasting Tim League, their ears might perk up because that means more to them than Random Troupe from City, ST. Of course, we love our random troupes, too, and they do very well because of how we set them up for success, but in general, the weird stuff is to set us apart from other comedy festivals and pique people's interest in something strange and new."

What's intriguing about the audiences for this particular festival is that they aren't just the passive consumers of creativity that many of their brethren who attend our surfeit of music, film, and comedy fests are. They're involved in the scene, deeply. The core of OOB's audience is hardcore – in other words, they're the improvisers and comedians who are working Austin's comedy stages year-round. And not only are they the audience base for Out of Bounds, Sweetlamb says, "they support the festival by volunteering in droves, helping to promote it, and acting as performers." And should OOB patrons not be members of the local comedy community already, they may well become ones as a result of the festival. "I'm guessing that there are many people who only hear about certain shows at the festival, and it is like a once-a-year treat for them," says Sweetlamb. "But we're finding that more and more people who have been in the scene for a couple years say that OOB is their gateway into the scene. A lot of new audience members get bit by the bug, and the improv training centers get a little boost for the rest of the year. I'm very proud that we seem to be a catalyst for that."

A consequence of this is a very savvy crowd for your average Out of Bounds show – an aspect of OOB in which Sweetlamb also takes great pride. "One thing that distinguishes Austin from some other scenes is that the audience is very improv-educated. So performers can really play to the top of their game without having to worry about losing the audience. We are hungry for experimentation, variety, and sharp execution as a comedy audience base."