The Gandalf of improv is all over the comedy festival 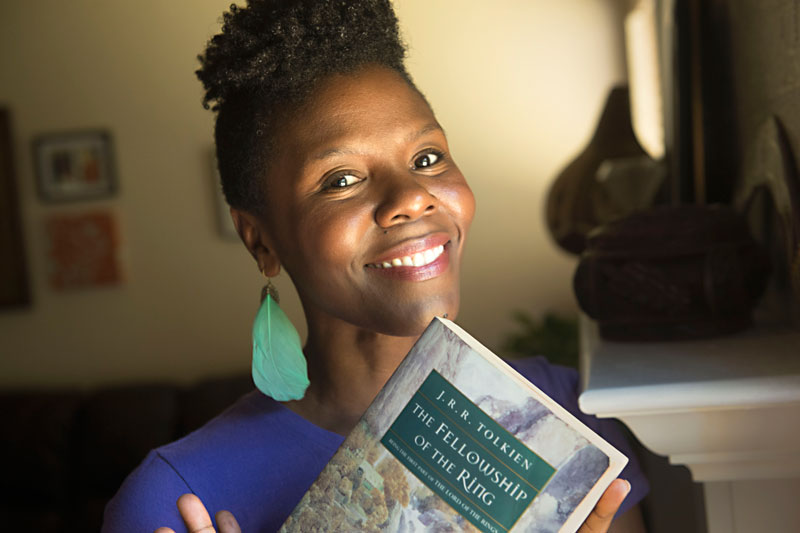 The Lord of the Rings metaphor was the twist I never saw coming.

The conversation that Shannon Stott and I were having centered on improv, a subject about which she is beyond enthused – "I could talk about improv forever," she insists gleefully – and we'd gone nearly an hour toward that forever with nary a name from Middle Earth dropped. We'd delved into her improv history pre-Austin (ComedySportz in Richmond, Va.); the finer points of short-form vs. long-form, games vs. narrative; local troupes that have left a deep impression on her (The Knuckleball Now, Confidence Men); and her packed schedule for the 2019 Out of Bounds Comedy Festival (a short-form set as part of the five-performer troupe Bric-a-Brac; a solo speech improvised to a slideshow she's never seen in Speechless Live; a set as one half of Twins, the duo in which her improv partner Quinn Buckner, a white man, portrays her experiences as a black woman; and a long-form narrative with a cast of 14 in the improvised blaxploitation film Super Black).

Then, while discussing her strengths and weaknesses as an improviser, Stott started explaining what she does when someone else takes the lead role in a scene, and she was suddenly talkin' Tolkien.

"One of my weaknesses is genre work," she admits. "I'm just not very good at it. [For Super Black,] we watched a lot of Seventies Foxy Brown movies, and portraying those characters is not a thing I can hold for an hour and a half. I'm not good at it, pure and simple. But what I am good at is supporting your vision and your ability to be good at that. I can support you. I can build your world for you. If you want to play a butterfly, I can be your flower; I can be your whatever it is that makes you spread your wings and fly. I can be your forest. I can be the rest of the Ents. 'Oh, you want to be an Ent? Great! Just bear with me while I set up Frodo and the rest of the crew, and I can help you. Give me a second, so I can put you in the spotlight of being an Ent.'"

Wait ... Ents? How did we jump from a simple butterfly to the tree folk of Fangorn Forest? But there's no time for an answer. Stott's pushing deeper into Middle Earth.

"I don't know why this is on my mind, but there's a line in The Lord of the Rings where Gandalf is like, 'Bilbo Baggins, I'm not trying to rob you. I'm trying to help you.' Right? In [Gandalf's] brain, Bilbo is the star of the show. Bilbo is who we're following. We need him to succeed. Gandalf is laying – oh my God, let me just talk about this forever! – Gandalf is laying the track. He's going ahead of Bilbo to make sure he has places to stay; he's going ahead of him to make sure that other wizards aren't against him. He's making sure that things are in place so the ring can move forward.

There's humor in the obvious incongruity of the image: the ancient, bearded, berobed male wizard of a fantasy realm embodied by this young, spirited, African American female improviser who just now happens to be sitting in a Kerbey Lane Cafe in Austin, Texas. A far cry from Ian McKellen, yes, yet not a role that's inconceivable for someone like Stott. Improv allows for all possibilities. When Stott describes her two favorite things about improv, the top of the list is that "it is the one and only place where you can actually be-slash-become-slash-do anything. You hear this on Reading Rainbow all the time: Your imagination is the only confine to what you can do. That's my favorite."

But there's more in Stott's laugh than her delight in the comic contrast. There's also the joy of discovery, like that which shines in improv at its best. A scene begins with no clear direction, but as the improvisers work together with a mutual trust and openness, some direction emerges, as if by magic. It can be a source of wonder and real joy, for audiences and improvisers. And as Stott dropped down this LOTR hole to explain how she does what she does in this work that means so much to her, she has discovered this truth about herself that she'd never put into words this way before.

This happens another time in our conversation when I ask Stott, of all the different kinds of improv she'll be doing at OOB – solo speech, duet scenes, short-form games, long-form narrative, small cast, large cast – where is her home, the place she feels she's bringing all of her skills and artistry to the stage and being her best improv self?

"Doing Speechless is my favorite thing." Then she throws back her head and laughs like she knows that isn't the answer she's supposed to give, but, boom, there it is.

She's wondered herself why she likes the improvised speech format so much. She likes getting to use her artistic improv brain, but it isn't about impressing the audience with her rabbit-out-of-a-hat remarks. Rather, it's that "I get to take care of an audience in a way that is creative and fun and surprising to me and the audience. And I love that. I love delighting an audience the way I want to with no distraction. It's 'Let's do this together. How do we do it together? How do you participate in my success?'"

As she says this, Stott's eyes light up with a Eureka! flash, and she lets out a euphoric "Ah, ha ha, ha ha! That's it! How do you participate in my success? All the Speechless Lives that I've done, I've always had an element of the audience doing something. My most successful one, I was a camp counselor, so I was getting them ready for camp. And I had them all stand up and sing the camp song. 'On the count of three, we're all gonna sing the camp song. One, two, three.' And the audience just sang ... words. They just made it up. They were looking at each other, and they were laughing and having so much fun. And I was like, 'Great. Give yourselves a round of applause. We're ready for camp.' And that was it. Their success was my success, right? I love that.

"And I think I could take that vein and say probably the most exciting and fun part where that will connect will be Super Black. Because it's the same – it's like my Gandalf area. For the person playing Super Black and the villain and all those things: How can I give you success? Where can I fit in that's gonna make this show pop and shine?

"Your question is: Where do I feel most at home? It's wherever I feel I'm doing something for you so that you can succeed so that I can succeed. 'Are you succeeding? Oh good, that means I'm succeeding.' And everyone can see that we're succeeding."

Shannon Stott performs in the 2019 Out of Bounds Comedy Festival in:

A version of this article appeared in print on August 23, 2019 with the headline: “I’m Gandalf!” 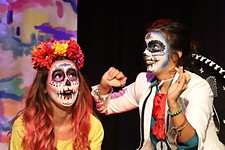