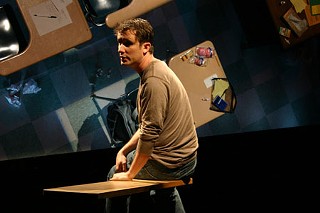 The Vortex, through April 5

One-person, multicharacter shows have become ubiquitous in contemporary theatre, but few perform them like Rob Nash. The Austin-based theatre artist has been creating one-handers for 17 years – writing them, performing them, and playing all

the characters in them. Beginning with 12 Steps to a More Dysfunctional Christmas, Nash and the Vortex have premiered 12 of his original shows, including all four of the high school plays, Freshman Year Sucks!, Sophomore Slump, Junior Blues, and Senioritis, that form the basis for Holy Cross Sucks!, which premiered at the Vortex in 2000 and enjoyed a run off-Broadway in 2005.

The thing about Nash, the thing that should make anyone who hasn't seen him see him, and the thing that should make anyone who has seen him see him again: He makes it all look so easy. Often doing little more than sitting in a chair or standing in place, Nash plays two, three, four, or more people, switching characters at lightning speed while never failing to embody all distinctly, physically and vocally, scene after scene. At one moment, he's a Hispanic seductress; the next a fat kid. At another moment, he's a teen rebel, then a Jewish rabbi. Kids, their parents, their friends, their girlfriends, their teachers, the Taco! Taco! Taco! lady, Nash nails them all. He's credited with 29 characters in the program, but I remember some that weren't listed, and I distinctly remember 23 of them.

Which amazes me. If 23 actors were in a play, I don't think I'd be able to recognize them all in a lobby, but I distinctly remember 23 of Nash's characters, so greatly did they strike me as people. And that's the magic of Rob Nash.

But seriously, I don't mean to gush. You might want to know something about the play. Well, it's exactly what you would expect from a story about Catholic teens coming of age: rebellion, sex, and self-discovery. In one storyline, a young man accepts his homosexuality. In another, a teenager impregnates his father's girlfriend, who then becomes his stepmother. While such themes may not necessarily sound like the stuff of comedy, Nash mines them for all the comedic gold they're worth. He packs four years of high school into less than two hours, making friends, losing friends, reconciling, going out, smoking bongs, and having sex with himself. In one scene, Nash plays eight characters who say hello to one another as each joins a group, and the names, the looks, the poses go flashing by like frames flipping past a lens, like a living, speeding cartoon. I wanted Nash to slow down so I could enjoy it even more.

Four years of high school in 100 minutes. Twenty-nine characters. Sound and light cues like so many candies in a comedy jar. (Kudos to stage manager Tamara L. Farley for keeping up with them all.) And Nash makes it look easy! But you know the truth, don't you? There's nothing easy about it. Write and perform 30 characters? Easy? Are you kidding me? If you haven't seen Rob Nash, you should. And if you have seen him, you might want to take a look again.