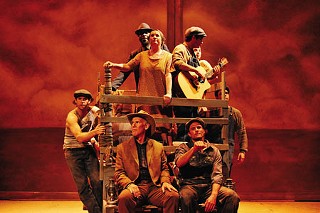 Zach Theatre Kleberg Stage, through May 10

A long, low horizon stretches across the back of the stage. Below it is earth baked bone-dry, above it thick, roiling clouds that blot out the sky – a dust storm like the wrath of Jehovah

blowing our way. Dirt covers the stage, and beating down on it is a broiling orange light through which more dirt appears to gust. It's really fog, but the illusion is so convincing that your throat tightens. Before a word is spoken in Zach Theatre's moving production of The Grapes of Wrath, you feel the arid desolation of the Dust Bowl and the winds that scattered its people from their homes.

When the large ensemble ambles onto this barren patch, you grasp the desperation in their characters' lives, the sense that their world has shriveled up as thoroughly as their crops. What once held them to this soil – the land they farmed, the means it gave them to live, their neighbors – has, as one says, gone with the wind. And as their story unfolds, all the talk of drought, foreclosures, arrests, and poverty makes clear that they're bound to be leaving themselves soon, more human tumbleweeds blown across the scorched and empty plains.

But it isn't only the land that's parched; the souls of these people are, too. Beaten down by callous banks, police, and other authorities, they've lost their faith in what's right and in themselves. The Joads, the clan at the heart of John Steinbeck's novel and this Frank Galati adaptation, abandon Oklahoma and, like so many Dust Bowl families, head to California, lured by the promise of steady work picking fruit in green orchards. But as they suffer misfortune upon misfortune, they speak again and again of sin and the law, no longer sure what either means. Some, like Harvey Guion's ebullient Pa Joad and Paul Mitchell Wright's genial Uncle John, erupt in anguish, fearful that the source of their woes is their transgressions against God. Some, like David Christopher's Tom Joad and Jarret Mallon's Floyd, seethe at the injustices committed by those with power on their side and fight back, though it means going against the law. Jim Casy, the preacher who has lost his calling, repeatedly questions his faith, his doubt traced with touching humility by Marc Pouhé. Then there is Janelle Buchanan's Ma Joad, the heart of this production; she is no less shaken by misery than anyone – feelings revealed in pauses and flashes across her face – yet she remains steady, a rock in a harsh wind, answering any questions to her or in her own heart with the refrain that one does what one has to do. It's a hallmark of Dave Steakley's staging that, just as Cliff Simon's set, Jason Amato's lighting, and Craig Brock's sound make us feel we're in a physical desert, the performers collectively make us feel we're in a spiritual desert.

There is moisture to be found here, though in the music woven through the scenes. Traditional folk tunes, hymns, and songs of the Great Depression, arranged sensitively by Allen Robertson and performed with deep feeling by John Pointer, Sarah Gay, Rich Upton, and others in the cast, are a wellspring of comfort and compassion. Even when they express pain, the beauty of their delivery grants a measure of solace. And in the end, that is as much what the show is about as tribulations and sorrows. The haunting final image, of a young mother of a stillborn child suckling a starving man, is of profound kindness and grace – qualities desperately needed as we come into our own hard times. This production does the good service of showing us that with beauty and power.