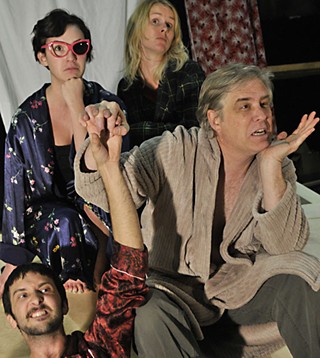 
What a strange title. What a strange play. I'd call it a strange production, but it isn't when you consider its genesis. First staged in 1974, this original work by the Mabou Mines troupe was, in a sense, a direct descendant of the surrealism of the late 19th century and the dadaism of the early 20th century, when artists began to seriously challenge both cultural and theatrical norms. But Lee Breuer, who directed the original production and is credited with writing the script, wasn't interested in overthrowing existing structures so much as remaking them in an entirely new context. He and his collaborators – JoAnne Akalaitis, Ruth Maleczech, Fred Neumann, and David Warrilow, to name a few – didn't want to turn the culture on its head but rather wanted to re-examine and reform the way that theatre, that story, was made. The result was an intensely collaborative process that saw everyone in the company, at one time or another, take on the roles of artistic director, producer, writer, and actor. And you can find almost exactly that same process going on right here in Austin today with the avant-garde theatre company known as the Rude Mechanicals.

But don't think of this production, in which we see a lone beaver deconstruct himself and his life in word and movement, as some sort of tribute. That would most certainly be doing it a disservice. Think of it more as a necessary journey, one the Rudes began with their staging of the Performance Group's legendary Dionysus in '69 two years ago, the first production in what the Rudes call their Contemporary Classics Series, in which they restage historically significant experimental performances. It's as if the Rudes, who have constructed themselves in the image of companies like the Performance Group and Mabou Mines, are returning to these legendary productions so they can closely examine their own roots and become much deeper and richer for the collective experience.

Unfortunately, B. Beaver does not have as much to recommend it as Dionysus in '69. The latter was an ecstatic, revelatory piece of theatre that encouraged extensive audience participation and packed a massive spiritual wallop. B. Beaver, despite its eclectic mix of nonlinear storytelling, poetic dialogue, dancelike movement, and back-alley puppetry, hasn't quite the same spark. The nonlinear structure especially doesn't help. Robert Pierson as the stuttering title character handles a load of jabbering dialogue for most of the evening, is helped quite ably on occasion by the show's other actors: Adriene Mishler, Elizabeth Doss, Aron Taylor, and Ellie McBride. But as with so many nonlinear stories, the work feels more like a dream – and a kind of lazy, floating-down-the-river-type dream, at that. Not even the set, with its myriad curtains, ropes, and free-floating two-by-fours and pieces of plywood – which feels more like a character than any set I've ever seen – can hold enough of our interest to keep us from walking out after wondering just what it was that we witnessed. 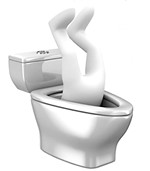