Revenge of the Space Pandas 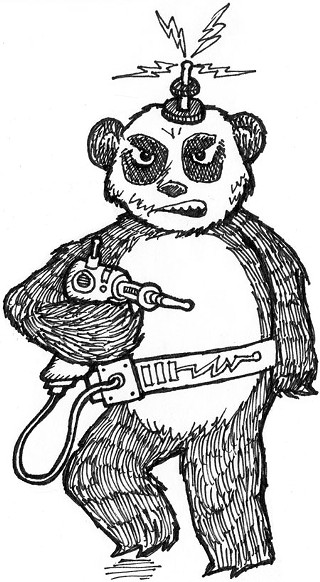 Revenge of the Space Pandas, or Binky Rudich and the Two-Speed Clock

The manuscripts of David Mamet, which now are preserved at the Harry Ransom Center, are best known for their gritty, street-smart style and harsh explorations into masculinity. Perhaps lesser known is his work on intergalactic travel. But if you are unfamiliar with Revenge of the Space Pandas, at least know this: During his recent talk at the University of Texas, Mamet said it was his favorite play that he wrote.

Space Pandas has all the wit and snapping dialogue that Mamet's known for, but its style and humor is much closer to Mel Brooks' Spaceballs than to, say, Glengarry Glen Ross. Binky, a precocious 12-year-old, is trying to build a two-speed clock in his Chicago suburb. He unwittingly sends himself and his two friends, Vivian and Bob the Sheep (which isn't just a nickname – he's got wool), across the cosmos to Crestview, fourth planet in the Goolagong System.

In Crestview, the three shocked Earthlings encounter a gamut of clownish aliens, including, yes, a couple of Care Bear-looking space pandas. To find a way back to their home in Waukegan, Binky and company must find a way to outwit George Topax, the spandex-and-sequin-wearing space tyrant with a penchant for dropping giant pumpkins on dissenters' heads. Classic Mamet, eh?

Il Teatro Nostro's production of Space Pandas is housed in the United States Art Authority, a new space attached to Spider House Patio Bar & Cafe. It's a pretty spare setup, with bare boxes making up the stage, speakers arranged for a rock concert, and school desks placed in a half-circle for the audience. Walking past the low lights and bartender, you get the feeling that this isn't about theatre! – fancy costumes, complicated sets, and pageantry – no, Il Teatro Nostro's Space Pandas is about performing, about a group of people wanting to put on a play regardless of financial or spatial constraints.

Watching Space Pandas, it seems clear that Il Teatro Nostro really enjoyed and wanted to put on this production – sadly, that's not something you see in every production across town. Their effort outshines their shoestring budget. Aside from some sparkling fabrics, the costumes aren't going to dazzle you. Nor will the set or the acting blow you away. But Il Teatro Nostro gives you passion and determination with Space Pandas, along with some good laughs, too.

Revenge of the Space Pandas