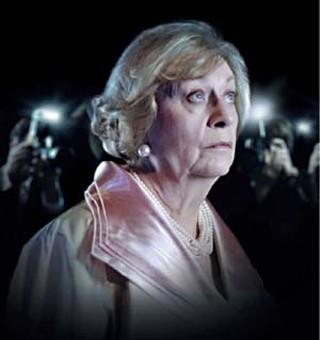 The camera crews wait with their lenses trained on the podium. Projections of the logo for "Lear Corporation" are emblazoned behind the stage. As their leader approaches the mic, the audience warmly greets Her Majesty. This ain't your granddaddy's King Lear, not by a long shot.

The Vortex Repertory Company's production, directed by Rudy Ramirez, reimagines the classic Shakespearean play in a modern thrust, replete with cameras, cell phones, switchblades, and major multinationals. Instead of the usual king, the play is helmed by Queen Lear, played by the esteemed Jennifer Underwood, and likewise the traditionally male roles of Edgar, Kent, and the Fool are appropriated by women.

Ultimately, the production feels like Ramirez is more interested in putting ideas over Lear than through Lear. The majority of the significant emotional reactions are to extra-textual events. Having Cornwall, consumed with boredom, scroll through his iPhone as Lear is humiliated by her daughters is indicative of a modern adaptation for better and worse: Yes, sure, that's what a Cornwall type might do nowadays, but surely that's not more important than how Lear's daughters cast her back and forth, stripping away her dignity and sanity.

Likewise the projected videos from "Lear Network News" correspondents is very interesting and effectively produced, but, more often that not, going to the videos makes the show feel more fragmented rather than more cohesive. In fact, the most iconic speech in all of Lear – the "Blow, winds, and crack your cheeks!" verses that the beleaguered dictator delivers toward the unforgiving tempest – literally can't be heard in Vortex's Lear because of the sound effect of heavy rain and the ensemble surrounding her to take photos of the fallen queen.

I'm not saying that a contemporary production of a Shakespearean play needs to keep all the lines from the original text or stick strictly to iambic pentameter – far from it – and the swirl of flashing photography on the projected screens behind the stage is very captivating. But if the play's most famous lines are so unimportant as to be indistinguishable from the ancillary noise, well, the priority of the text and its delivery to this production becomes pretty clear. Lear is at its most entertaining when it's two-dimensional: the evil of Edmund, Cornwall, Regan, and Goneril; the miserable sorrow of the Queen; the hot-blooded nature of Kent.

Although the blurring of the line between government and business in our modern era is a fascinating gambit to play with, it only seems skin-deep in the Vortex production – it's more interested with the flash of the paparazzi and insinuating corporate takeover instead of an actual war, for instance. And yet as the lights fade on the dearly departed, that's what we're left with: the brief bursts of light pulling what meaning they can out of the show.