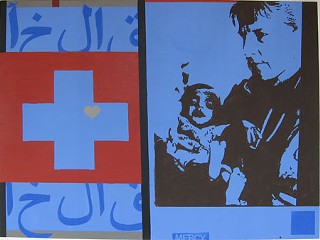 "After September 11, I decided to join the National Guard." Matt Wester explains his job like this: "A public affairs specialist is a photojournalist for military newspapers and is the liaison with civilian media. I was in Iraq from January 2005 to January 2006. I was stationed 25 miles northwest of Baghdad, and I was in charge of taking photos and writing stories about a brigade, which consists of about 2,500 people. I wrote stories about all different kinds of army jobs, from tankers to army nurses to mechanics. I went on missions three to four times a week for a year, and that's where I took the photos."

These 2-year-old photos are the basis of the five paintings in a small art exhibition called "On Foreign Soil." The show also features Gerardo Arellano, who styles his work like a Mexican Rauschenberg (free association = freedom to some artists). Wester includes some quite-abstract imagery in a stenciled paint-by-numbers mannerism in some portraits; others include symbols and small bits of text like "Mercy," "I Want to Come Home," and "Too Many Memorials." They all share a level of compassion. In one, an adorable boy smiles – he is clearly a cherished kid – while next to him, a man's eyes and face look aged and chiseled by sorrows. This painting began as a photograph. In his downtime on the base, Wester would edit and Photoshop, already planning this art series. "A lot of the photos were images that I would see over and over again in my head – the most powerful images that I saw during my time there." Indeed, without knowing Wester well, it's safe to assume from this personal series that his reaction to suffering is deep empathy.

This is a brief exhibit at the United States Art Authority, the new art space managed by Spider House. Keep an eye out because Wester is working to create a 40-painting series about Iraq. He paints in his studio at the Pump Project Art Complex and will exhibit his insightful series there in May. Wester says: "I feel driven to get these images down and make a statement about the war. It's therapeutic to put these images into my own terms while translating them into art, and I'm able to express my feelings about the war at the same time."