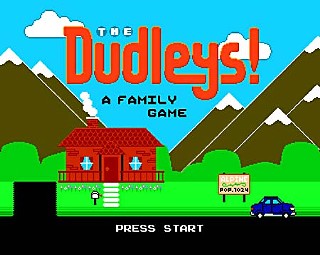 Video games, especially since the advent of World of Warcraft and its brethren, carry the connotation of being a form of escapism. What difference is there between playing games for 10 hours straight and a similar TV marathon?

There's a sense of agency to the accomplishments one achieves in video games that is incredibly difficult to find in the real world: rescuing the princess, winning the championship, saving the world, etc.

Being able to wield such power, to have such effects from our cause, is enticing precisely because oftentimes we're so helpless in reality. We want that ability to win. That's the world of The Dudleys!: A Family Game, where a Mormon family's struggle with the death of its patriarch is wrapped in the context of an 8-bit video game.

The script, written by Texas-raised, New York City-based playwright Leegrid Stevens, has the structure of an old video game and a family drama at its core: Instead of scenes, it has levels, with corresponding avatars projected behind the players in each round; the game/play is paused during asides; "Try Again?" is projected when characters fail to answer a question directly. The family drama focuses on three children and their mother dealing poorly with the father's death from cancer. Each family member holds some personal resentment regarding the father's departure.

The Dudleys! is incredibly ambitious both as a play and a production; it's one of those pieces of art that feels like it's trying to cram an entire existence into one show. While it might follow that the levels would progress in order as the plot advances, The Dudleys! instead has a positively Slaughterhouse Five-like sense of time, the game being played out of order. And though the protagonist of the piece is ostensibly Vic, the self-assured eldest brother who looked down upon his father's weakness, all the characters in the extended world are given some moment of clarity or expression.

The production, helmed by new Tutto Theatre Artistic Director Gary Jaffe, synthesizes a lot of impressive contributions. First and foremost are the exquisite 8-bit video renderings. Not only do they hearken back to 8-bit classics such as Super Mario Bros., Out Run, and Paperboy, but the characters seamlessly interact with the animation. When someone makes a motion to turn the sink on and off, for instance, the water animation comes on and off as well. Accompanied with this video is some pretty terrific composition by playwright Stevens, as well as wonderful costume design by Benjamin Taylor Ridgway. The design team embraced the video-game roots of the script, and it really paid off. And the choreography by Melinda Rebman and Zenobia Taylor warrants mentioning: a lot of strangely delightful group movement pieces. (And I'm not sure I've ever seen actors run more in a show!)

The Dudleys! asks a lot of itself and its audience. At times, the drama practically hits you over the head with its rawness, and yet the next level will have a visit to a failing cancer clinic degenerate into a co-op zombie brawler game. But for all its complexities and shifting tone, the ending is quite emotionally affecting, and there are lots of delights along the way. We might wish we had a reset button on life. We might wish we could win the game on our first try. But we can't. Ultimately, that's what The Dudleys! wants to teach us: No matter where we try to escape to, we still have to confront the hardest boss of all – life.