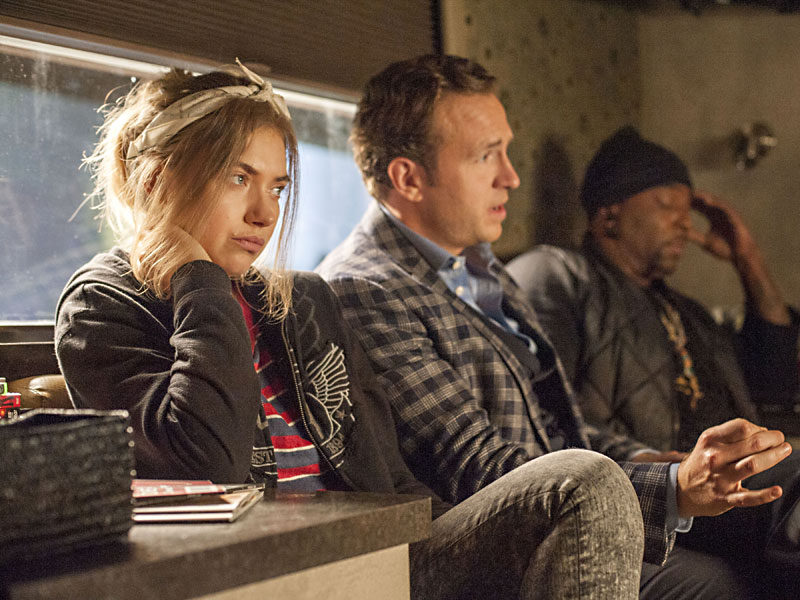 Softly and quietly, one misstep at a time, by inches and references to things I don't understand but almost certainly know I wouldn't like, Showtime's Roadies became my favorite show of the summer.

If you'd told me there was a TV show by the writer/director of Almost Famous in which a wispy, beautiful girl regularly sighed into space about the fallen state of mankind, or that a fairly walloping portion of each episode would be devoted to the white man's overbite that signifies people engaging in music appreciation together, I would have said, "No, thank you." I am allergic to both of those things; they make me dreadfully nervous. Penny Lane was a long time ago, and we've all learned a lot about the Manic Pixie since then.

But the reason I stayed, and I think maybe why hardly anyone else did, is that Cameron Crowe has also learned a lot since then. Try to pick Roadies apart as a Gen-X musician and you will fail; try to understand it as a television show and it falls apart. What it is is a very long conversation between two viewpoints who generally believe themselves mutually exclusive.

In one corner we have Kelly Ann (Imogen Poots), the ideologically pure documentarian who, despite being about 12 years old, is a repository of all that is holy about rock & roll. In the other corner is the bumbling, touch-averse corporate stooge, Reg (Rafe Spall). Good looking enough, earnest enough that the buzzwords he keeps trying to teach these grizzled backstage lifers don't quite turn to ashes in his mouth, but fundamentally soulless in some unspecified, British way.

What happened next, by any stretch, should have been a slow, satisfying teardown of the false branding and media gods that Reg worships. As he came to know backstage life, its highs and lows – for a starry-eyed romantic, Crowe is great at the lows; the best parts of Almost Famous are its disappointments – he would encounter something real and true about himself, and capitulate. And while in a lot of ways that is what happened, these are not the ways that matter. What matters is that what should have been a rout was instead a conversation.

Reg earned the crew's trust, respect, even love; Kelly Ann took a few hits in the idealism herself. Watching that conversation bring itself to life, against all the odds, was in the end the show's most moving story: neither a cynical Klosterman death knell for music, nor a cynical millennial "what's the problem?" response to economic realities, but a carefully managed and thoroughly loving conversation between the two.

In an emotional economy built on shifting ideas of what constitutes the real, the authentic, the sellout, the poseur, and the passionate artist, you eventually realize that getting one over on a rube will never, ever feel as good as finding out their favorite song.

My friend Graeme visited from London in May; he stopped short at a Downtown mural, quizzically: "Eat, Drink & Be Local"? I'd never vocalized any of this before, at least not in earnest demonstration of my honest affection for our home, or how we keep it lit: That SXSW is a costume we all put on for a couple weeks a year, playing the part of a theme park of authenticity, building a wax-and-rolling-paper god called "local" – a digestible form of her more pagan forebear, "weird"– to which the techies buy in so happily that when they move here themselves, they emulate "local," counting seniority and Austin tenure in months rather than decades.

We were standing at a stoplight as I said this, and coming toward us from the other crosswalk was a healthy dude with an undercut and a beard and a T-shirt stretched tight over pecs and all that T-shirt said was "LOCAL." And that was all it needed to say. It's a lie, but it's a sweet lie, and at some point you have to realize you're not in charge of deciding who's real and who's a tourist. Trying to do so, past some unforeseeable threshold, is to make yourself a dinosaur.

I don't know if I would have ever arrived there, been okay with it, if it weren't for Roadies. But at some point this summer, I felt it shift, and what started mattering is this: When it comes to art, or the places we call home, there is no zero-sum. This is the inexhaustibility of magic.