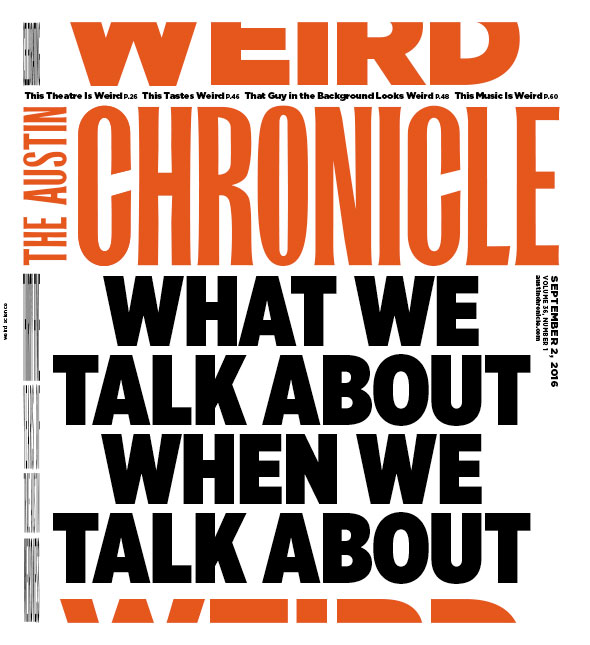 Why the Chronicle's 35th anniversary is focused on That Word

Letters to the Editor: Classic Cuts

35 years of "keeping it weird"

Beau Reichert struggles with the city over his backyard arts complex

Austin Energy rate cuts are both a financial and political dividend

ACC Board Place 9 Race: Not a Snoozefest

When is daylight robbery not a crime?

Preserving the Food and Beverage Industry With Fermentation

Dear Glutton: Where to Eat on a Rainy Austin Day

Stay dry and have a good meal

The role of a lifetime

World War I thriller gets lost in the desert

The Light Between Oceans

Friendships are tested in this bittersweet coming-of-age tale

Lo and Behold: Reveries of the Connected World

An AI experiment goes wrong in this forgettable genre exercise

The 9th Life of Louis Drax

A doctor unravels the mystery of a child in a coma

Stranger-than-fiction doc about an eccentric doctor

A Tale of Love and Darkness

Meta-sequel to the Joe Swanberg film

Seeing Life’s Brevity in the Art Poles of South First

Capital T Theatre delivers a fast-paced, funny take on this tale of a demonic hand puppet in a church basement

The images of war in Goya's prints are brutal and immediate, and it is for this reason that we must look at them
columns

Page Two: Sitting on the Dock of the Bay Watching the Tide Roll Away

Stuffed and mounted animals may have their place in museums, but they're kind of creepy

The Luv Doc: Every Few Minutes

Eminent domain – the government made a low offer – what next?