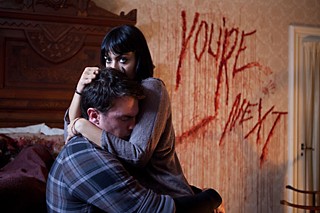 "I don't like serial killer movies." An odd confession from writer/producer Simon Barrett, considering he picked up best horror screenplay for arthouse stalker film A Horrible Way To Die at Fantastic Fest 2010. A year later, he and director Adam Wingard are back with You're Next, their take on the home invasion trope. And guess what? It is another genre that often annoys him. He says: "The films that inspire me are not films that I like, but films that I dislike. I see them, and I start to think, 'How would I do that differently?' or 'How can that be done better?' or 'I've seen that so many times – what's a new way to do that?'"

The project's genesis came out of touring the festival circuit with A Horrible Way To Die and seeing an endless stream of Straw Dogs wannabes. Barrett says: "Adam was into the idea of doing one because he finds them scary and intense, and again I was like, 'I really don't like a lot of them.' I feel like the home invasion genre is still basically stuck doing the same thing that Funny Games was satirizing in 1997." So instead of the same old gun-to-the-head, find-the-wall-safe pabulum, he added some screwball sensibilities, making it "this awesome chamber comedy. ... Adam kept calling me and asking how intense and scary the script was going to be, because I think he was hoping for something atmospheric like The Strangers, and I kept just saying: 'Er, I don't know. I think it's kind of funny.'"

Wingard has become synonymous with the horror end of mumblecore – a subgenre so fresh that it still does not have a nickname. (Mumblegore? Mumbledoom? The choice is yours.) He says, "From the get-go, I told Simon I wanted something that was more technical, something focused more on a sense of atmosphere and tension and action that I'd never done before." That meant abandoning the radical, dreamlike sensibilities of his earlier films. Unlike the drug-dazed miasma of his debut, Pop Skull, You're Next "is a film that takes place in one night, so everything had to be very precise," he says. "Before, all my experimentations were about creating a unique cinematic language. For this one, the experiment was to see if I could utilize more conventional cinematic languages."

If the script and the look break from Wingard's earlier introspective work, that was exactly what he was looking for. But while You're Next moves away from mumblecore's cinema verité roots, it still draws deep from its talent pool. The Innkeepers' director Ti West gets a cameo, while Joe Swanberg (with whom Wingard co-directed Autoerotic), Amy Seimetz, and AJ Bowen are all back from A Horrible Way To Die. Barrett says, "We knew our next film would be much bigger, and we wanted to give them a bit of a reward, cast them in a movie where we could actually pay them a living wage."

READ MORE
More You're Next 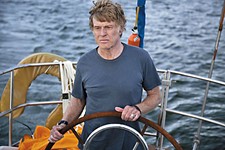