1. Her I laughed, I cried, I said "Hey, that's me!" Spike Jonze delivers yet another emotional sucker punch, this time with (amazingly, even more) feeling.

2. The Act of Killing Drafthouse Films' big-league Academy coup comes not from the genre but from horrific reality in this nightmarish and real documentary. Pleasant dreams.

3. The Punk Singer Riot grrrl power and Kathleen Hanna examined in absorbingly anarchic detail. Grrrls to the front; guys, chill the fuck out and learn.

4. All Is Lost The old man (the old Robert Redford) and the sea go white-knuckle to whitecap and call it a draw. Just flat-out exhilarating.

6. Harry Dean Stanton: Partly Fiction That face, that voice, those weatherbeaten-but-still-golden pipes ... Who knew the Repo Man could out-sing the man in black?

8. The Wind Rises Hiyao Miyazaki's final film is a dream of poetry in motion corrupted by bombs in flight. He will be sorely missed.

9. Ain't Them Bodies Saints Austinite David Lowery's lovely and lyrical ode to love and a .45 (or two) is a timeless and beautiful thing, like death, or Texas.

10. Blue Is the Warmest Color Sure, the NC-17 girl-on-girl sex is, ahem, hot, but more to the point, young love both flares and chars with relentless, honest vitality here. 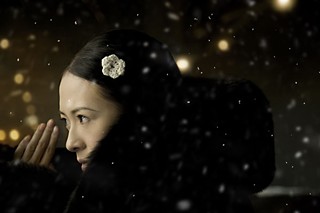 The Lords of Salem, You're Next, Spring Breakers

Grudge Match: Not every crinkly wrinkle in a great actor's career should be steamrolled into a faux-inspirational rationale to go one more round. Kill the darlings, already.