With transportation, it's hard to find the middle of the road

Crime Down, Except for Murder

Austin homicides up; everything else down

General Land Office gives the gift that keeps on giving

The city auditor brings the latest numbers on a WTP4 shutdown

DOJ on Redistricting: Tell It to the Judge

The DOJ refuses to preclear U.S. and Texas House redistricting

When it comes to water, Augustine is no saint 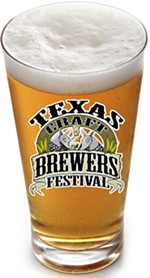 The festival returns after a hiatus

The once and future pit master returns?

Frites to meet you
music The 2011 Austin City Limits Music Festival draws to a close, as does Emo's outside on Sixth Street A look at the savory and the tweet of Hilah Cooking

... and aliens and abductors and much, much more at Fantastic Fest 2011

Teaching You the Fear

This Is Your Mind on Black Rainbows

Beyond the Black Rainbow

This true story of the world's first dolphin with a prosthetic tail provides solid family entertainment.

The "junk science" used to make the case for the Texas execution of Cameron Todd Willingham for the arson murders of his children is persuasively laid out in this locally made documentary.

In this South African drama, a township overcomes its fear of AIDS by the example of a courageous young girl.

This Hindi film presents a timeless story of love in the face of political hostilities and religious conflict.

Brad Pitt hits a home run with this film about the inner workings of baseball. It's a film that will appeal to sports fans and nonfans alike.

Who needs more than five actors to do a Shakespeare play? Not this troupe.

All Over Creation: Come Together

You're not alone in the theatre, and there's power in that

A rare play that manages to offer both comfort and truth

Gay Place: Texas Is a Queer State of Mind

9/11 conspiracy theories will outlive their perpetrators

What a drag it is getting old ... even with surgery

Stacking rocks has become a new pastime along the Galveston Seawall