When it was first released in 2004, Dear Pillow garnered critical favor and festival success (including an Independent Spirit Award nomination for its writer/director, Bryan Poyser) ... but no distribution deal. After the long slog of writing, rewriting, financing, casting, scouting, shooting, reshooting, editing, post-producing, and promoting their movie, Poyser and his producer/cinematographer/editor (and fellow UT graduate), Jacob Vaughan, came face-to-face with the first immutable law of independent filmmaking: Making a movie is easy; finding someone to release it is not. Then, after three years of deferred hopes and failed negotiations, Heretic Films, a small distributor of horror, cult, and exploitation movies looking to expand its market share, stepped in, and a local favorite became, at long last and happily, available. Filmed in Austin, Dear Pillow relates the painful misadventures of Wes (former Austin high schooler Rusty Kelley), an awkward 17-year-old with a giant protective mop of black hair and an obsession with all things sexual. Wes lives with his divorced father in a sprawling apartment complex, passing his days listening in on neighbors' phone conversations and dreaming of losing his virginity. Looking to make sense of all his sordid predilections, Wes befriends an older man, Dusty (Brewster McCloud's Gary Chason), who writes pornographic stories for a magazine called Dear Pillow and who eventually becomes a Virgil to the kid's desperate Dante, guiding him through the snares of adolescence and sexual morality toward liberation, even pulling in the complex's beautiful, seductive landlady (Viviane Vives) to help complete his education. An 85-minute tribute to erotic confusion, Dear Pillow is both fascinated by and hostile to the absurdities of our culture's Puritanism and takes obvious joy in poking holes in them. This kind of provocativeness is nothing new to Poyser; his 2001 short film, "Pleasureland" (included on this disc along with this year's "Grammy's"), is a surreal, bleakly comic look at the self-consuming dangers of porn obsession, and along with several deleted scenes, audition footage, and commentary from Dear Pillow's cast and crew, it offers a glimpse inside the mind of an artist fascinated by the thrills and consequences of desire. 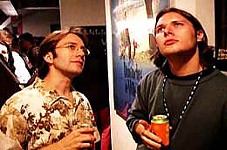