Party at Pedazo, Access granted awards, and 'Dear Pillow' living the dream: Read all about it all! 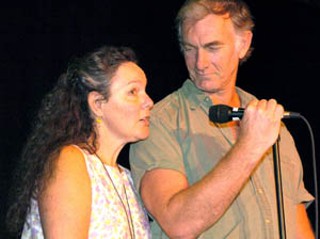 Producer Maggie Renzi and director John Sayles introduced The Secret of Roan Inish, their 1994 film about Irish selkies. The Gaelic League of Austin invited Renzi and Sayles for the screening, a benefit to send local Irish musicians to the Ireland championships in August. The couple's next film, Silver City, is set for a September release. (Photo By Gary Miller)

Chunk Funk Redux Dept.: If your busy summer social schedule for the evening of Friday, July 2 is still awaiting adventure, excitement, and plenty of beer, you could do worse than to head over to Pedazo Chunk World Headquarters (2009 S. First) around 6pm. That's when the Little Code-Free Video Store That Could is kicking off their third anniversary party, with owners Dannie and José "Lobo" Ramirez pulling out all stops with free surprise screenings, bands and kegs on their swell back deck overlooking verdant (and soggy) Bouldin Creek, and enough bizarre film geekery to get you arrested in several bordering states. More info at: www.pedazochunk.com.

Pillow Talk Redux Dept.: Bryan Poyser and Jake Vaughn's Dear Pillow has snagged the top narrative feature prize at the 2004 Atlanta Film Festival. The film, which coincidentally stars Rusty Kelley, of last issue's "The Kids Stay in the Pictures: How Teenage Wunderkinds Are Keeping the Year-Old Motion Media Arts Center Young at Heart" (June 25), is still lacking distro despite a relatively high-profile run that began with this past winter's Slamdance Film Festival out in Park City and more recently nailed the Best Feature prize at the Boston Underground Film Festival, although a summer run at the Alamo Drafthouse Cinema is in the offing. More info? Good lord, yes, please: www.dearpillow.com.