Invest in the fests! 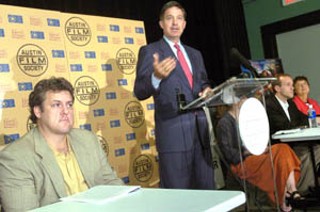 On Monday morning at Austin Studios, the city of Austin released a study on the local economic impact of film and visual media production. According to the Austin Film Society, the study, authored by consultant Jon Hockenyos (l) of Texas Perspectives Inc., addresses "key issues filmmakers in Austin are concerned with, recognizing best practices throughout the film community, and will recommend strategies for implementing best practices." To study the study and check out the "action plan" that city officials like Mayor Will Wynn (center) plan to undertake in order to capitalize on the $360 million and 3,500 jobs created annually, go to www.ci.austin.tx.us/news/2004/film_impact.htm. (Photo By John Anderson)

It's Like the Peace Corps Only With More Chantal Akerman Films Dept.: Now that the Austin Gay and Lesbian International Film Festival is in full swing – and if you haven't attended any of their dynamite, kickass, and oh-so-amazing screenings, you really need to get yourself over to www.agliff.org to get your silly film life sorted out – it's time to start looking forward to the next big fest, which, of course, is the ninth annual Cinematexas International Short Film Festival, Wednesday-Sunday, Sept. 22-26. They need your help! Specifically, they're in dire need of volunteers for this year's fest, and to that end they'll be holding a recruitment party tonight, Thursday, Sept. 2, 7pm, at the Vibe, 508 E. Sixth. This blatant call for assistance will feature bands and short films from this year's festival to lure you in (we suspect there'll be beer there, too). If you're not familiar with this fine little Austin fest, you owe it to yourself, and them, to check it out and, if possible, lend 'em a hand. More facts and figures available at www.cinematexas.org.

The Clash Were There, Where Were You? Dept.: The Austin Film Festival is the other giant (friendly) hydra looming on the horizon, apart from the impending Austin City Limits Festival, that is, and not surprisingly, they're holding a benefit next Wednesday, Sept. 8, 6-9 pm, at Tambaleo (302 Bowie, but forever etched in our memory as the former Electric Lounge) for their Young Filmmakers Program. Vulcan Gas Company and (former Clash video-shoot venue) the Armadillo World HQ's photographer, Burton Wilson, will be showcasing his immensely cool work, and, once again, we suspect there will be beer and righteous food of some sort on tap. Admission is $20 (discounts for AFF members available), which might seem steep to those of you who are still shooting on, ahem, film, but, as anyone who's seen Wilson's work can attest, it's cheap at twice the price. More info at www.austinfilmfestival.com/content/events/index.htm.

Pflugerville's long-running and last-of-its-kind Discount Cinema (3407 Wells Branch) is finally retiring its screens, a victim of a property manager who had decided to replace the venerable home of bargain cinema with a Walgreens. No word as of yet whether the Walgreens chain plans on complementing their new outlet with a balcony, but one can hope... 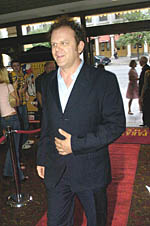 Short Cuts
Last Saturday found Tobe Hooper in absentia and John C. Reilly quite the opposite