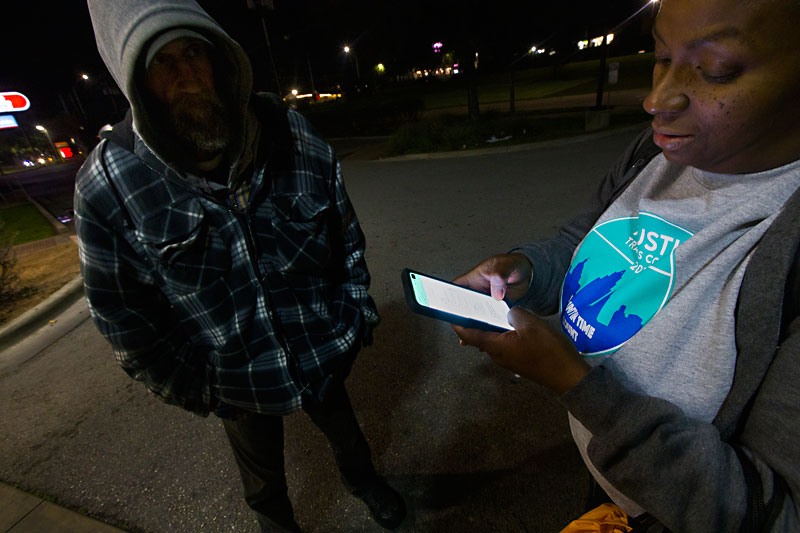 The number of people counted in Travis County during the annual census of people experiencing homelessness increased by 11% over the previous year, according to data released Tuesday by the Ending Community Home­lessness Coalition (ECHO). The 886 people who volunteered to conduct the federally mandated Point in Time Count from 3-9am on Jan. 25 counted 1,574 people living without shelter (up 45% from 2019), with another 932 living in one of the community's shelter facilities (down 20%), for a total of 2,506 (up 11%).

ECHO attributed the increase to several factors. The number of volunteers participating in the count was up 39% over 2019 – more people counting means more people are likely to be counted, a trend evidenced by data from previous years. A new web-based survey tool and dividing the county into geographically smaller sections also allowed volunteers to be more thorough in their counting, according to ECHO officials.

Changes to Austin's camping, sitting, and lying ordinances in June, which led to an increased visibility of homelessness throughout the city, also played a role, ECHO officials said, especially in the improved ability to count among marginalized populations. "The decriminalization of homelessness may have accounted for increased visibility (and higher proportions) of more vulnerable populations such as women and youth counted," the report reads.

The 20% drop in people in shelters from 2019 to 2020, ECHO says, reflects the community's heightened focus on permanent housing rather than temporary solutions. ECHO's Sarah Duzinski attributed some of the decrease to the two Downtown shelters that transitioned to a "housing-focused" or "housing first" model, removing 130 temporary beds; another 103 beds had been incorrectly classified as temporary shelter in 2019 and reclassified in 2020, and about 23 people were displaced from the Salvation Army's Downtown shelter the night of the count due to a burst water pipe.

Despite the overall increase in those counted in 2020, the rate of homelessness in Travis County has remained around 0.2%, Duzinski told City Council at a work session on May 19 – a "testament" to the work done to house people, she said. In the 2020 PIT Count, 63% of those interviewed (not everyone counted is interviewed) said they first experienced homelessness in Aus­tin (another 19% elsewhere in Texas, and 17% out of state), contrary to the prevalent myth that people without homes flock to urban areas with more services and opportunities. This percentage was 61% in the 2019 count.

But the report acknowledges that there is still much improvement to be made. African Americans make up 9% of Travis County's population, but over 36% of the homeless count. ECHO has convened a Racial Equity Task Group to address the disparity; potential solutions include changes to the Coord­in­ated Entry System used to first connect people with services, along with ensuring those services help all demographic groups.

Placing people into permanent supportive housing (PSH) with case management will continue to be a priority, said ECHO Executive Director Matt Mollica. Since he took the reins at ECHO in the summer of 2019, efforts have begun to convert Austin motels to PSH, along with an expansion of the Community First! Village operated by Mobile Loaves and Fishes on the eastern edge of Austin. These projects are expected to add 600 PSH units to Austin's inventory; the city's total PSH capacity ebbs and flows from year to year, since some residents may only stay in a unit for two months (the minimum considered "permanent") while others live there for a lifetime. ECHO's data showed 1,810 PSH beds in Travis County in 2019 and 1,675 this year, which Mollica says shows the strategies are working to get and keep people housed.

"Programs are keeping people in PSH for longer," he told reporters. "We didn't have a change in our stock from year to year ... what you're seeing with the number of move-ins growing is fewer exits."