Point in Time Count Looks to Give Overview of Homelessness in the U.S. 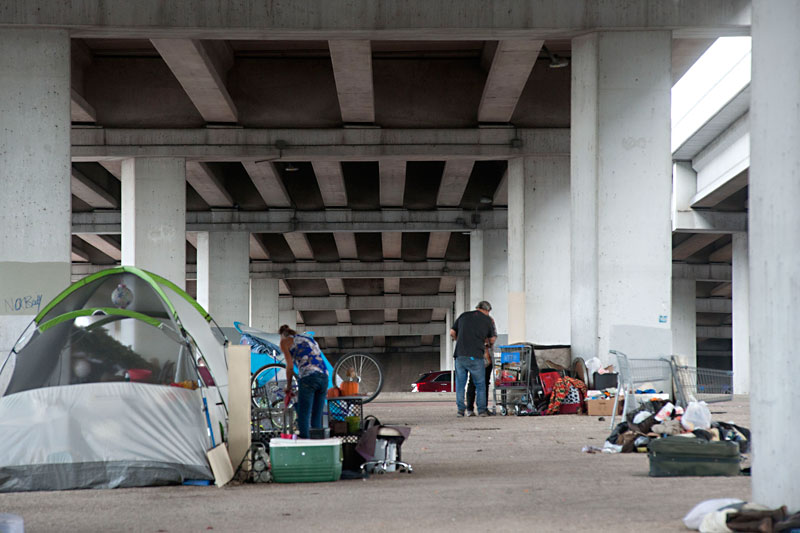 ECHO has recruited 800 volunteers for Saturday's count, but say 200 more are needed. (Photo by John Anderson)

Depending on who you ask in the homelessness services world, and how candid they're willing to be, the Point in Time Count is typically described as incomplete, flawed, or "mostly bullshit." But the annual census of people experiencing homelessness is required by the U.S. Department of Housing and Urban Development (HUD), and flawed though it may be, it's how the federal government determines what level of funding local groups are allocated toward efforts to reduce homelessness.

HUD uses the numbers from local Point in Time efforts to compile a report for Congress that gives an overview of homelessness across American cities.

"Recently, HUD has been referring to it as a Point in Time estimate," Front Steps Executive Director Greg McCormack said of the count's imperfect methodology. "I like that a lot better." Like other service providers, Front Steps – which operates the Austin Resource Center for the Homeless – depends on the count, scheduled for Satur­day morning, Jan. 25, because most HUD programs require inclusion of the number on funding applications. In 2019, Front Steps was able to connect 55 individuals with permanent supportive housing, thanks in part to HUD dollars. HUD uses the numbers from local PIT efforts to compile a report for Congress that gives an overview of homelessness across American cities. The number of people counted over the weeklong window when communities conduct the count is used to calculate how much funding the agency asks for to help pay for Continuum of Care services in those communities.

Any community receiving federal funds from HUD to help end homelessness is required to conduct the annual census, but local service providers are quick to point out that the PIT represents merely a rough estimate of the number of people experiencing homelessness in a community on a given night. Only the people that can be found on the streets or in a shelter are counted; that means people sleeping in their cars or deep in wooded areas are often overlooked. People in jail cells or hospital beds – who might otherwise be considered by HUD to be "chronically homeless" (i.e., homeless for 12 consecutive months or on four separate occasions totaling 12 months in a three-year period) – are not counted either.

So, when people say there are 2,225 people experiencing homelessness in the Austin area, they are referencing the 2019 PIT Count total, and they are not giving an accurate number. Another way to count people without stable housing is through the Homeless Management Information Sys­tem, the database used by ECHO (End­ing Com­mun­ity Homelessness Coalition) and its service provider partners to track people experiencing homelesness, which yields a much larger number.

But that number is not totally accurate either: If a person "self-resolves" their homelessness – as in, they find housing without help from a service provider – the HMIS cannot easily label those people as having exited the system. The HMIS number, then, is likely an overcount; realistically, the number of people experiencing homelessness in Austin is somewhere between the PIT Count and the HMIS one.

Still, the PIT Count is the number HUD uses to distribute funding (a 2017 analysis by ECHO found that about $12 million of the $30 million in governmental funding local providers received came from federal sources). It's also the number city leaders, advocates, and critics will point to for all of 2020 to illustrate the scale of the problem in the Austin-Travis County region. All told, it's important work, even though HUD does not provide any additional funding for it, so it is largely a volunteer effort.

ECHO had recruited about 800 volunteers as the Chronicle went to press on Wednesday, and they're looking for another 200 or so to help with the counting before Saturday. Groups of roughly a dozen volunteers are assigned to one of 73 sections throughout the county, to one of three shifts from 3-9am, when people living without housing are more likely to be sleeping and easier to find. Each group has a team lead – someone who has participated in previous counts – to help organize ahead of time and to facilitate the work on the actual day. Team leads are given autonomy to coordinate and prepare their teams for the count; some do advance scouting in their section to give people living on the street or in encampments a heads up that they'll be coming by for the PIT. Michelle Friedman, a five-year veteran, told us she knows most of the locations where people sleep in the area because she lives nearby and volunteers with animal welfare groups that work. She says she finds it useful to draw a map for her team that breaks the section into smaller subsections.

Friedman's custom map of her section – number 66, which is bounded north by Stassney Lane, south by Slaughter Lane, between I-35 and Manchaca Road – marks overpasses under which people live and buildings people frequently sleep behind, making it easier for volunteers – especially first-timers – to find people. Friedman explained that preparing volunteers ahead of the count is helpful, because the morning-­of can bring a mixture of excitement and tension. "Going behind office buildings and exploring parts of the city you won't see in your normal day-to-day is exciting," Friedman told us, "but working up the courage to talk to someone in these circumstances is difficult. It's kind of like starting a race. Once you get going, you're fine, but when you're looking around for someone to wake up and have this personal conversation with, it's uncomfortable."

Those personal, uncomfortable conversations are critical to the local impact of the count, because they help give a clearer picture of who is experiencing homelessness in our community, and why they're in that situation. Volunteers gather this information through a survey, which will be conducted digitally for the first time this year. Questions include how long an individual has been homeless, if they have a physical or mental health concern preventing them from maintaining an income or housing, and what kind of services they are currently engaging in.

Matt Mollica, ECHO's executive director, told us these questions are important because the data gathered helps determine what kinds of programs are funded to meet the specific needs of people experiencing homelessness in Austin. "If we see an increase in people that need permanent supportive housing," Mollica offered as a potential example, "when we're considering our funding from HUD and going after bonus funds, we might go for more support there instead of in rapid rehousing."

The arduous work of the PIT Count is about the vulnerable people living on our streets who need connections to services, but the effort is also edifying for the volunteers. The uncomfortable conversations described by Friedman bring housed individuals face-to-face with the realities of what life is like without a home. Regardless of how empathetic a person may be to the plight of homelessness, talking with a person who has nowhere else to sleep other than in their car or under a highway can humanize the problem in a way that passing individuals on the street can't.

Cara Santucci, a first-time volunteer, told us this was part of the reason she signed up for the count. "Homelessness is such a complex problem," she said. "No one person's story is the same. I feel like understanding that is badly needed in our community, especially among the people posting hateful stuff online."

Speaking of which, does anyone know if Gov. Greg Abbott is free on Saturday morning? Maybe he could learn something about the Texans he's so quick to demonize on Twitter.