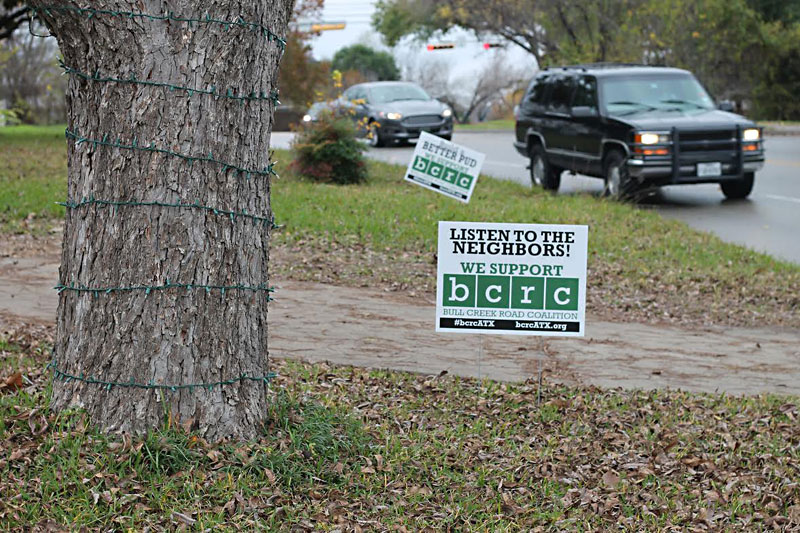 Last week, landowners surrounding the 75-acre tract of land at Bull Creek and 45th Street, an unzoned, formerly state-owned piece of land now under the control of ARG Bull Creek, Ltd., sued the city of Austin in district court. They say the city's interpretation of Texas' valid petition rights statute – namely, that neighbors around formerly unzoned tracts do not have the right to force a supermajority vote of Council for planned unit developments – is wrong.

"The state statute uses the language 'change in zoning,' which we argue the Grove PUD zoning application is, by any definition that you look at it from, a change in zoning," said Grayson Cox, lead plaintiff and Bull Creek Road Coalition (BCRC) vice president, "because zoning is defined in state law as a change of boundaries and development regulations on a property. And that's exactly what we're doing here. We're changing what can be developed on that property, the use on that property. This is absolutely, fundamentally a change in zoning."

ARG's Grove at Shoal Creek PUD has drawn concerns from neighborhood activists since it was proposed. It's caused an ugly divide between homeowners around the tract who have consistently sounded the alarm about traffic and other issues (the BCRC) and density-minded activists who say the single-family neighborhoods are out to sabotage what they see as needed growth (such as the Facebook group Friends of the Grove).

Natalie Gauldin, an FotG founder, said she hopes this lawsuit won't affect or delay the Grove's progress. "They've been talking about this for a while," she said. "Seeing it come out, it wasn't a major surprise, but obviously at this point it's really unfortunate, because the signal – to me at least, and probably to others – is: We don't want you to develop your project. We want valid petition rights so we can stop your project. So that is unfortunate that all the parties couldn't come to some agreement."

Cox said the suit is happening now, because the group was working to ensure it had the necessary signatures for a valid petition (20% of homeowners within 200 feet of the property) in the event the lawsuit is successful. He said they submitted the petition in March and "the city sent that back to us saying, 'Congratulations, you've got 50% more [signatures] than you need, however we haven't changed our decision. We're still not accepting this as a valid petition.'"

If the city does accept it as a valid petition, Council would need a three-quarters supermajority to pass the PUD, if it's rejected by the Planning and/or Zoning and Platting commissions. The lawsuit is just one avenue pursued by homeowners like Cat and Ryder Jeanes, who live next door to an ARG-owned house on 45th Street that ARG wants to tear down and replace with an exit to the development. "We want basic property rights just like every other citizen," said Cat.

ARG said in a statement that the suit "is misguided and continues to perpetuate false information," and that "state law is clear and the City of Austin has consistently and correctly interpreted and implemented state law with respect to the process of zoning our property ... We support the city in its interpretation and implementation of state law and we remain committed to a mixed-use, urban infill development that answers many of our city's challenges with growth and fulfills the goals of the Imagine Austin plan."