Puzzling over a variance on Avenue D, and spending the first of the 2018 bond funds 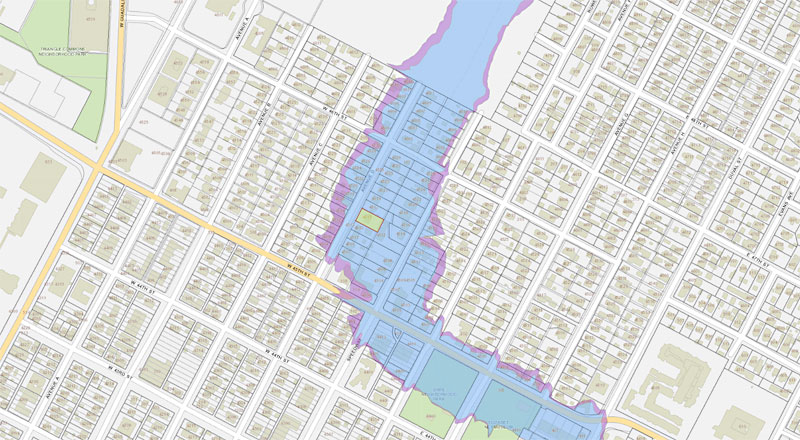 City Council spent about an hour on Thursday, March 7, working on whether to approve a floodplain variance for a house at 4515 Avenue D. Sitting in the 25- and 100-year floodplains of upper Waller Creek, the house has experienced flooding as recently as 2004. The owners would like to replace the existing structure with a larger home on a pier and beam foundation about two and a half feet off the ground, which would help mitigate its own flooding risk without increasing the risk for its neighbors near Hyde Park.

A new rainfall study has changed the way experts view flood risk in the city – it’s much higher than we’ve previously thought.

This prompted déjà vu for Council Member Kathie Tovo, who recalled that a similar variance had been requested, and denied, once before for this very same home (located in her District 9). City Floodplain Administrator Kevin Shunk admitted that an applicant asking to expand property in a floodplain like this would typically be denied, as it had been. However, a new National Weather Service historical rainfall study, known as Atlas 14, has since changed the way experts view flood risk in the city – it's much higher than we've previously thought.

The Watershed Protection Department has drafted new citywide floodplain rules based on Atlas 14 that are ready for board and commission review and then for consideration by Council. Those rules could allow cases like Avenue D to be approved administratively; but for now, they go to Council, and both the dais and the staff had some trepidation. Since the building currently lacks safe access to the street during a flood event and the new one will decrease that flood risk, staff recommends approval, breaking from precedent.

Mayor Pro Tem Delia Garza expressed concern that Council might approve this variance and then find itself having to pay for that new, larger house in a buyout down the line. On the flip side, said CM Greg Casar, "In the future, this may very well not be a variance [but] what we actually want to see happen, which is to see private investment reduce flooding, even in small ways." Shunk agreed.

This was not enough to sway eight members to vote to approve on all three readings, so it'll come back again after a 6-5 vote in favor. Don't hold your breath, homeowners on Avenue D. (Or maybe now would be a good time to practice.)

The March 7 meeting also included a couple of wonky discussions on bonds: one on the city's own 2018 bond dollars, and another on whether to endorse the Velocity Crossing Public Improvement District in Del Valle, approved by Travis County. CM Alison Alter attempted to insert language that would've told the county that Council wouldn't be supportive of any more PIDs until the city completed the overhaul of its own policy. That action wasn't listed on the agenda, as the mayor pointed out, so it couldn't be included.

Council also resolved issues surrounding the first appropriation of funds from the recently adopted 2018 bond package. This $151 million tranche includes $42 million for affordable housing (of the $250 million approved in Proposition A); $61 million for flood mitigation, open space, and water quality protection (of the $184 million approved in Prop D); and $1.6 million for fire station improvements (of the $13 million included for that purpose in Prop F), among others. The dais also ultimately approved, after some questioning, CM Ann Kitchen's plan for the creative arts sector to propose uses for up to the full $12 million voters approved for "creative spaces" in Prop B.

The Town Lake Circle rezoning case didn't come back up for discussion on Thursday; after passing it on first reading the prior week, Council received an email from the current apartments' tenants association asking for postponement. The developer agreed to the delay and is reportedly going to meet with the association between now and Council's next regular meeting on March 28.