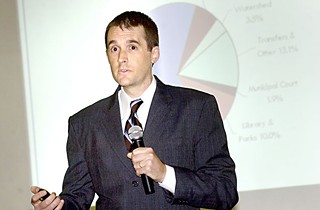 Deputy Chief Financial Officer Ed Van Eenoo was front and center Monday and Tuesday, with his staff monitoring Council proposals and delivering almost instant calculations of the effect of line items on totals and tax rates. (Photo by John Anderson)

On Tuesday afternoon, after much pushing and pulling, as well as a good deal of hemming and hawing, City Council accomplished its most important annual task of adopting the annual budget: FY 2013-14, which goes into effect Oct. 1. Although in some years the official budget readings are relatively ceremonial – scheduled for three days, they often only require one morning – this year's two days of budget readings were both detailed and occasionally contentious. Members tested philosophical differences, jockeyed for various potential cuts or pet programs, and tried to satisfy various public constituencies without busting their own financial chops.

The Line-That-Could-Not-Be-Crossed was 50.29 – that is, the current property tax rate of 50.29 cents per $100 of assessed valuation, which Council consensus on Monday had decreed was as high as they were willing to go. That followed last week's explicit rejection of an increase by Mayor Lee Lef­fing­well, and although the mayor was the most adamant, he was joined on Monday by Council Member Bill Spelman, who amplified his earlier complaints of rising city costs with a brief chart that showed expenditures in the last decade rising faster than residential income – most of which he attributed to unnecessary and unjustified added spending for the Austin Police Depart­ment, despite what he described as a decreasing workload. He argued that "small steps" over time had led to this disjunction, and, "It's time we stepped in another direction." Accordingly, he said, he would not be voting for any new expenditures.

Shortly thereafter, Prof. Spelman left to teach his LBJ School class, with the ironic result that he wasn't around for many of the 5-1 votes that followed – in a round-robin routine, someone on the dais would propose a bit of spending here or there, and the mayor would object, praising the intention but insisting it was not a "critical need," and voting against it. Had Spelman returned (as he did Tuesday), presumably there would have been more 5-2 votes.

But in the end, Council succeeded not only in holding the symbolic 50.29 line, but reducing it ever so slightly to 50.27 – that .02 (two-hundredths of a cent) cut apparently worth about a dollar in the roughly $34 annual increase the owner of a median-priced $185,000 home will still see, because of rising property values. That was immediately the lead in the Statesman and on the TV news, along with the reiterated "$3.3 billion budget," a number that reflects All Funds (including income-generating enterprise departments) rather than the roughly $790 million General Funds, or basic expense budget, where Council did the bulk of its heavy lifting.

With headline media culture focused exclusively on the property tax rate, and never on what it buys in public services, it's not surprising that elected officials would inevitably submit to the same perspective. The Statesman even reported that it was "the first time in recent memory that the City Council cut the tax rate instead of increasing it" – memories at the Bat Cave apparently not stretching all the way back to FY 2008-09.

Also reported cavalierly was the 51.14 rate "recommended by City Manager Marc Ott" – while literally true, that was a spring draft budget number that was always a working estimate, that did not yet reflect summer financial data, and that is always a number designed to give Council an approximate parameter. When Ott and Leffingwell both thanked staff Tuesday for their hard work, it was not simply ceremonial. "I've never seen this level of scrutiny put to the budget," Leffingwell said later. "We listened to each other, staff, and stakeholders, and clearly demonstrated a commitment to affordability and fiscal responsibility."

He mostly didn't sound that chipper during the meetings themselves, which became a puppet theater of ups and downs over the long two days. Staff had already turned up roughly $13 million in additional revenue from a combination of higher property and sales tax income – about half immediately dedicated to reducing the 51.14 rate – leaving about $6 million for Council to push and pull like taffy to fit under the self-imposed cap.

So what else did they do?

• Granted 1.5% across-the-board staff raise for all non-public-safety city employees (public safety is governed by union contracts), sweetened with $750 per employee (meaning lower-salaried employees get a higher percentage), although the latter won't start before April of 2014.

• Boosted the Parks and Recreation budget by an eventual (phased-in) several million, officially totaling 61 new positions (some for assuming cemetery maintenance) including both parks and pools.

• Added 47 new police officers (the original APD request) while simultaneously ending the overtime pay designated for 24-hour patrols of the hike-and-bike trails (causing mayoral consternation over "cutting" the public safety budget – meaning it would rise only $10 million instead of $11 million).

Council received intermittent updates from the budget staff, led by Deputy Chief Financial Officer Ed Van Eenoo, on how much each change was affecting the overall budget total as well as the property tax rate. By Tuesday afternoon, all heads were spinning from the rapid-fire adjustments upward and downward; when Van Eenoo confirmed the Magic Number of 50.27, the sighs of relief were audible.

As the dust begins to settle, we'll learn more about the details.