No Indictment in Officer-Involved Shooting 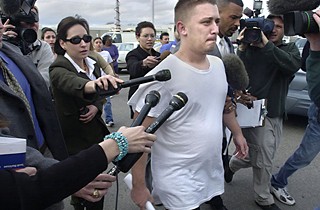 Maurice Pierce spent four years in jail before the murder charges against him were dropped in 2003. (Photo by John Anderson)

Austin Police Department Officer Frank Wilson wasn't aware there was anything out of the ordinary about the struggle with Maurice Pierce on Dec. 23, 2010, as he tried to arrest Pierce, who'd fled from a routine traffic stop in a Northwest Austin neighborhood. That was until Wilson felt "something wet" on his neck, Travis County District Attorney Rosemary Lehmberg said at a press conference last week. At that point something was wrong – very wrong. Wilson was bleeding from a long gash that had severed his carotid artery. During the struggle, police say, Pierce grabbed from Wilson's duty belt a small folding knife, wielding it effectively at Wilson's neck and making the several-inch cut. After realizing he was bleeding, Wilson pulled his firearm and fired a single shot into Pierce's abdomen. As Wilson lay bleeding near the driveway of a house on Campos Drive, Pierce got up and again ran, police and Lehmberg say, but he didn't make it far; his body was found slumped near the front door of a house two doors away. He was dead.

On Sept. 22, Lehmberg announced that a Travis County grand jury had, after hearing three mornings' worth of testimony – including from Pierce's teenage daughter – declined to indict Wilson for killing Pierce.

Why Pierce decided to run when pulled over just before 11pm for rolling through a stop sign not far from his sister's home (where he was living) is a matter of some debate. "Well, he had a habit of doing that," Lehmberg told reporters. True, Pierce had run before – notably during a traffic stop in Collin County several years ago. But according to Pierce's family, Pierce was traumatized after years of harassment by police who believed he was one of those responsible for the grisly 1991 murder of four teen girls in a North Austin yogurt shop. Pierce, himself a teen at the time of the crime, was one of four men who in 1999 were arrested and charged with the infamous yogurt shop murders. He spent four years in jail before the charges against him were dismissed for lack of evidence. But that experience – having been accused of and jailed for a crime in which he played no part, he and his family have insisted – scarred Pierce. According to Lehmberg, Pierce's daughter told the grand jury that he didn't want to go back to jail, and he told her shortly before he was shot that he would run from the police if pulled over. Indeed, he did just that, fleeing from Wilson across several properties before the fatal encounter on Campos Drive. At one point, Wilson attempted to use his Taser to stop Pierce, Lehmberg said, but it was not effective – either Pierce was too far from the weapon for its prongs to attach or his black zippered hoodie was made of material too thick for the prongs to penetrate.

It wasn't malice that led to the slicing of Wilson's throat, Pierce's family members have insisted; they say it was likely a stress reaction. At press time, family members were unavailable for additional comment. Pierce's sister, Reneé Reyna, told us earlier this year that she does not believe that Pierce would have hurt Wilson on purpose. But Lehmberg said there was no evidence to suggest that Wilson or his partner knew who Pierce was, or of his alleged connection to the yogurt shop murders, at any point during the fatal encounter.

The investigation into the yogurt shop murders is ongoing, Lehmberg said, as investigators continue searching a match to the unknown male DNA found inside the youngest victim, 13-year-old Amy Ayers. (For additional details on the case, see "Yogurt Shop DNA," Sept. 26, 2008.)